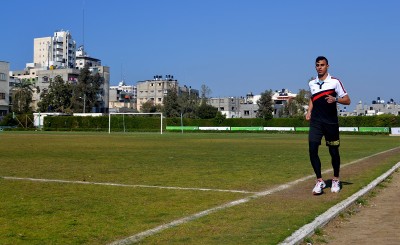 In the shadow of the bleachers of Yarmouk stadium in Gaza City, still damaged by Israeli bombing, 400-meter Olympic runner Bahaa Al Farra trains. Bahaa took part in the London Olympics, along with three other Palestinian athletes, in 2012. “I started racing at the age of 14,” he said. “We used to compete mostly among students. The coaches attended the competitions and selected the best players.”

That’s how he met his current coach, Ibrahim Abu Hasira, seven years ago. “In 2005 I had the opportunity to compete in a competition in Egypt, but due to the closure of the crossing I could not attend it,” Bahaa said. “Whenever we have opportunities, we face problems related to the siege and military aggression. Several times I stopped the sport due to depression or a bad mood. The first time I left the Gaza Strip was in 2011, when I went to Korea. I was very motivated. Then in March 2012, I competed in Istanbul, and in August 2012 in London for the Olympic Games. But after a week, we were told that we should leave, because we would have risked not being able to return to the Gaza Strip due to the problems in the Sinai.” 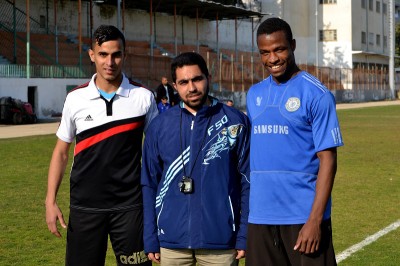 “London was a great experience,” Bahaa said. “I met gold medalists. I hope someday Palestinians can win gold medals. It was nice to see how people support the athletes. I felt great emotions. I hope one day to get on the podium. I’m running to represent my country and my people, to make sure that other people know Palestine. I run to prove that despite the suffering in which we live, some runners emerge from the darkness and manage to do something important.”

The Gaza Strip has no quality sports facilities where runners can train, Bahaa said. “This land is not suitable for runners, and would require appropriate shoes,” he said, indicating the ground on which he trains. Yarmouk stadium does not have a track for athletics. It is not a track and field stadium and there is a lack of equipment for athletes, such as starting blocks. Athletes myst train to use them, but have the opportunity only when they go abroad or shortly before competitions. 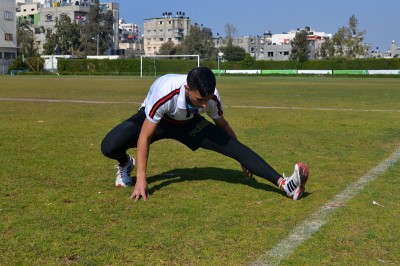 Bahaa has lost at least five opportunities to train or race abroad due to closures of the Rafah border crossing. “Sometimes when there is a chance, I say ‘goodbye’ to my friends and family, I go to the crossing and then I go back home,” he said. Since the overthrow of Egyptian president Mohammed Morsi in July 2013, openings of the Rafah crossing have been limited. The new Egyptian authorities open the crossing only sporadically, reinforcing the Israeli siege and isolating the population of the Gaza Strip more and more. 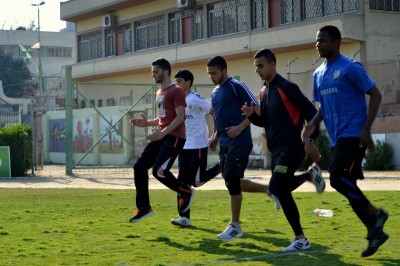 Now Bahaa hopes to compete in the 2016 Olympics in Brazil. “We hope there are international organizations that can sponsor Palestinian athletes,” he said. “We need training camps”. years old, Bahaa trains every day, except Friday, in Yarmouk stadium, on the beach or in the street. Like all Palestinians in the Gaza Strip, he faces daily challenged due to the siege. “Sometimes I come home after training and I have no chance to take a shower because due to the lack of electricity, there is no hot water,” he said. 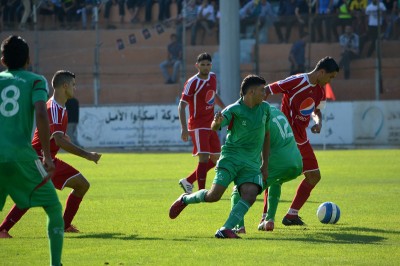 A football match in Yarmouk stadium. (Photo by Rosa Schiano)

According to Bahaa’s coach, Ibrahim Abu Hasira, “the psychological state of the runners is one of the worst aspects. The obstacles faced by the athletes cause great damage. Often they suffer from depression. I knocked on the doors of many organizations. They replied that there are no donations. I try to encourage the athletes to kill the depression caused by the siege. I treat them as a father, not as a coach. I try to let them overcome their psychological problems. Here athletes face few possibilities. I have been in many European countries in the past. I have seen how sport is considered. If you want to compare the situation there to that of Gaza, you could say that there is no life in Gaza. When athletes are able to leave the Strip, and they know about life in other countries, they feel very motivated. Then they return here to depression.”

Israeli violations: the report of the Palestinian Football Association 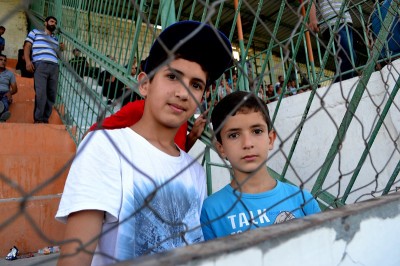 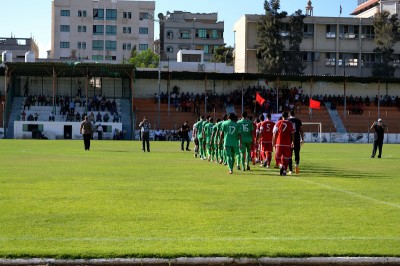 The paper stresses that the sport, and football in particular, face a series of obstacles and deterrents whose main cause is Israel’s military occupation. Football, the document states, should bring people together, promoting ethics, building bridges of friendship between peoples, and be based on the values of peace and fair competition. The restrictions imposed by Israel instead damage the morale of young Palestinian players, undermine their future as athletes and hinder the growth of football, and sport in general, in Palestine. 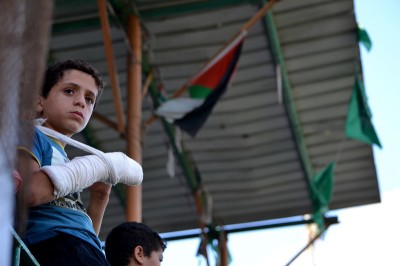 Israel has committed human rights violations against Palestinian athletes, many of whom were detained; restricted the freedom of movement of athletes and other sports figures; impeded and obstructed to construction of sporting facilities or destroyed existing structures (like the destruction of stadiums and sports clubs during bombings of Gaza); restricted the receipt of sports equipment sent by FIFA or donated by other sports organizations and federations, or releases donations only after the payments of exorbitant taxes; interfered in the organizations of friendly matches between Palestine and other associations through political intervention and pressure to discourage games; and intervened militarily during football matches. 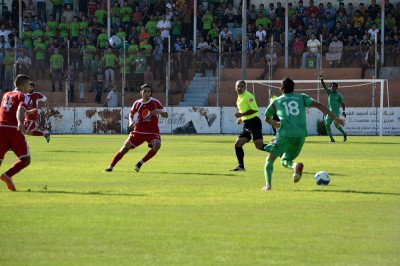 These actions are violations of the basic rights in FIFA statutes and the Olympic Charter. The document gives examples of athletes killed or detained by Israeli military forces, like the football player Mahmoud Sarsak, captured when he was leaving the Gaza Strip for the West Bank to play with a new club. He was detained for more than three years without process, and released in 2012 only after 90 days of hunger strike, under pressure from FIFA’s president, other sporting bodies and international public opinion. 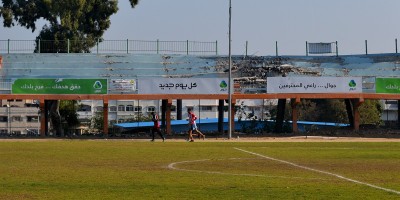 Israeli checkpoints prevent athletes, like all other Palestinians, from moving freely between Palestinian cities, while players who live abroad do not easily obtain permission to enter the Palestinian territories. For the players of Gaza Strip it’s difficult to enter the West Bank. Like other residents of the Gaza Strip, an athlete must obtain a special permit from Israeli authorities and indicate the reason for the visit, in addition to the destination city. If an athlete has to go to Ramallah, and for some reasons finds himself in another Palestinian city, he is likely to be deported to Gaza. Even permits to go to Jordan are obtained after exhausting procedures that negatively impact athletes’ performances. These restrictive measures prevent players in the Gaza Strip from joining the national team, and Gaza athletes from competing in the West Bank, like on 21 February, 2013, when Israel authorities barred 23 runners from participating in the International Palestine Marathon in Bethlehem without giving any reason. 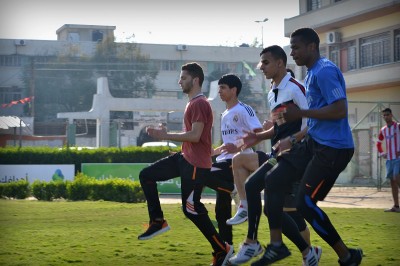 When Palestinian athletes from Gaza do not get permission from Israeli to go to the West Bank, they must travel separately and reach their team abroad. Delays at border crossings and other obstacles can cause the loss of their flights.

The latest violation against Palestinian athletes took place on 31 January, when two Palestinian football players, Jawhar Nasser Jawhar, age 19, and Adam Abd al-Raouf Halabiya, age 17, were returning from a workout at Faisal Al Husseini stadium in the West Bank town of Al Ram, and were wounded by Israeli forces near a checkpoint. While the two men were walking, the Israeli soldiers opened fire and released their dogs to attack them. The soldiers dragged the two athletes down the street and beat them. They were transported to a hospital in Jerusalem, and have undergone different surgeries for the extraction of bullets from their bodies. Jawhar was wounded by 11 bullets: seven in his left foot, three in the right, and one in his left hand. Halabiya was wounded by a bullet in each foot. Doctors at the Ramallah hospital where they were taken before transfer to the King Hussein medical center in Amman said it would take six months of treatment to assess if the two young athletes would be able to walk again. But they will not be able to play any more. 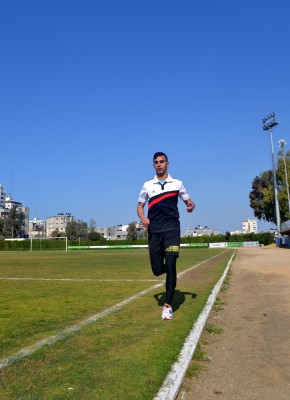 Al Rajoub has called for the expulsion of Israel from FIFA for its racist policies which violate international law. “The Israeli brutality against the two young men emphasizes the insistence of the Occupation on destroying the Palestinian sport, he said.”

Three days later, on 3 February, Avi Luzon, president of the Israel Football Association and Jibril Al Rajoub, met with FIFA president Sepp Blatter in Zurich to discuss implementation the agreements from the meeting on 23 September for facilitating the movement of players, coaches, referees, officials and equipment into, out of and within Palestine. The process, which is part of the “FIFA Israel-Palestine task force” announced by Blatter in July 2013, will be monitored by FIFA.