On February 15th, 2014, more than 60 Palestinian men, women and children from the South Hebron Hills and city of Hebron gathered in the Palestinian village of Susiya and together with international and Israeli activists, participated in a nonviolent action  organized by the South Hebron Hills Popular Committee. The action consisted in planting some 100 olive trees on Palestinian-owned land near the settlement of Susiya. 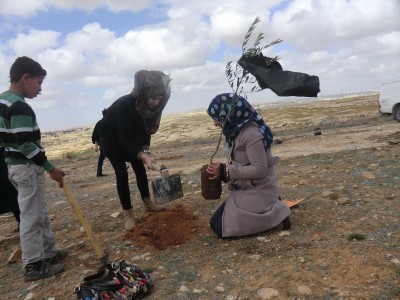 At around 11:00 a.m. Palestinian activists started to plant olive trees in the Palestinian-owned fields close to the gravel road in front of the settlement of Susiya.  An army car was already there and after some minutes additional Israeli forces arrived on the spot for a total of ten border police officers, sixteen soldiers and two policemen. In the meantime, other activists were affixing placards which read “no to occupation and settlement expansion” to trees and electricity poles.

At 11:14 a.m. the soldiers declared the area a “closed military zone” and after some minutes started pushing the activists away. A group of Palestinians slowed the Israeli forces’ action, giving other Palestinians time to continue planting olive trees along the gravel road. In some cases border police officers used harsh manners, even jostling some women.  The Israeli forces were able to make Palestinians move about 100 meters away.

As soon as the soldiers stopped pushing, Palestinian women began singing while other activists took pictures in front of the soldiers. The planting of olive trees continued. At 11:49 a.m. an army vehicle with a water cannon arrived and some activists moved away. However, a small group of activists faced the vehicle, standing in front of it and waving placards and chanting slogans against the Israeli occupation. At 12:16 a.m. when the planting was over, the Palestinians slowly returned to the Palestinian village of Susiya.

That action was a direct reply to the uprooting of eighty olive trees in Palestinian fields near Susiya, which happened only five days previously (http://tuwaniresiste.operazionecolomba.it/?p=2994).

Palestinians from the South Hebron Hills are strongly committed to accessing their land for everyday farming activities.

Pictures of the incident: http://www.operazionecolomba.it/galleries/palestina-israele/2014/2014-02-15-palestinian-activists-successfully-planted-one-hundred-olive-trees-on-fields-targeted-by-settlers-in-south-hebron-hills/