On Sunday the 23th of February at around 9:30 a.m. more than ten settlers forced a Palestinian shop owner to stop renovating his shop. The settlers did this by sitting at tables and chairs they had brought from the nearby Gutnick Center in Hebron, an Israeli visitors center close to the Ibrahimi mosque, eating breakfast right in front of the shop while harassing the men at work. 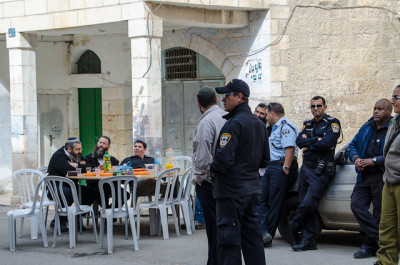 The shop owner had gotten permission to do the renovation by the Israeli Civil Administration but this was not satisfactory to the settlers, who forced the Palestinians to stop working. When the Palestinians tried to continue their work the settlers became aggressive towards them, making them stop.

The Palestinian workers from the Hebron Rehabilitation Committee, an organization which rebuilds Palestinians houses and helps improve living standards in the Old City in Hebron, asked the settlers to move the table and have their breakfast on the other side of the road but they refused.

The Israeli police, border police and soldiers were all present but did not interfere with the settlers’ harassment of the Palestinian workers. The stated reason for not interfering was that the settlers were on a public road and therefore were allowed to be there, ignoring the fact that the settlers confronted the workers each time they tried working.

The Israeli Civil Administration called the shop owner and ordered him to stop working for an hour until the settlers had gone away. As a result, the settlers managed to postpone the work of restoring the shop for about three hours.

Hebron was with the Oslo Protocol in 1997 divided in two parts, H1 and H2. H1 is area A and controlled by the Palestinian Authority, while H2 is under full Israeli control even though it is inhabited by around 30,000 Palestinians and about 500 Israeli settlers.

It is not rare that Israeli settlers from the Tel Rumeida or the Kiryat Arba settlements harass or even attack the Palestinians living in H2 in Hebron.