On the afternoon of February 11, 2014, settlers in the Tel Rumeida neighborhood of Al-Khalil (Hebron) cut down trees belonging to the Abu Eisheh family. While attempting to film the destruction of the trees, four human rights activists were arrested by Israeli police.

At approximately 3:30 p.m., three activists, a Swiss-American, an American, and an Italian, were sitting in their apartment in Tel Rumeida when they heard a commotion outside. Outside the apartment, they found a group of settlers, Palestinians, Israeli soldiers and Israeli police. They were informed by the Palestinians that a group of settlers was cutting down trees at a house just up the road.

The three activists began filming but were not allowed up the road to where the tree-cutting was taking place. While filming, the American activist was physically assaulted by a settler. None of the soldiers or police officers present intervened. Instead, the Israeli police took the passports belonging to the American and Swiss-American and told them to sit on the ground.

At this time, the Italian citizen returned to the apartment, where she was joined by a fourth activist, an American, who had just arrived. Shortly thereafter, a group of soldiers and police officers attempted to enter the apartment. They were not allowed entry, but briefly questioned the two activists outside the apartment door. The Israeli police then confiscated the passports belonging to the American and the Italian.

Not long after, all four activists were transported to the police station near Kiryat Arba, where they were interrogated and threatened with deportation. After seven hours, the activists were released.

The following day, February 12th, two activists from Christian Peacemaker Teams visited Tel Rumeida to document the destruction of the trees. They were not there long before several Israeli soldiers approached them, told them to stop filming, and took their passports. They were held for two hours before their passports were returned.  Israeli soldiers informed the two activists that if they approached the trees again they would be arrested.

The destruction of Palestinian trees by settlers is a chronic problem, not only in Tel Rumeida, but all over the West Bank.  In the past month alone, more than 2500 trees in the village of Sinjil were destroyed by settlers. Trees have also recently been destroyed by settlers in Qusra, Ramallah, and Nablus. Fruit trees are an essential resource for the Palestinian community, and their damage causes serious economic loss. It takes as long as 12 years for an olive tree to reach full maturity. 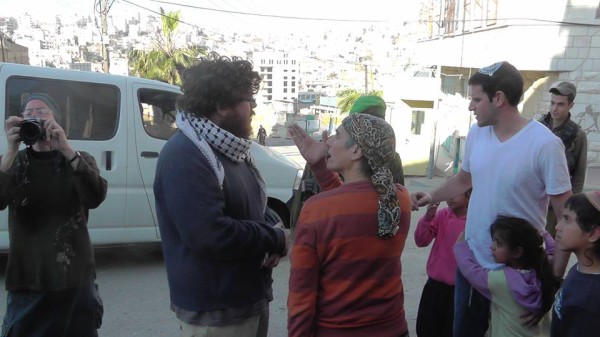