On Friday 10th January, a Palestinian demonstrator was injured after being shot in his leg with live ammunition by Israeli forces while attending the weekly Friday demonstration.

The incident happened in Ni’lin where Israeli military shot live ammunition against approximately thirty demonstrators who gathered around the annexation wall. An ambulance parked in the area drove the 40-year-old man to a hospital in Ramallah straight after being injured.

Israeli soldiers and Palestinians from Ni’lin clashed for more than two hours before the demonstrator was shot, Palestinian youth threw stones towards the military and Israeli soldiers responded with tear gas canisters, stun grenades and live ammunition.

Every Friday residents of Ni’lin gather to march towards the annexation wall in order to protest the loss of their stolen land. 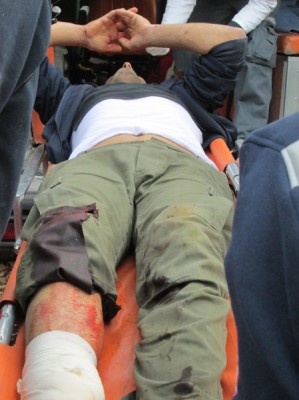