Why does Israel treat Gaza farmers sowing wheat by hand as military targets? 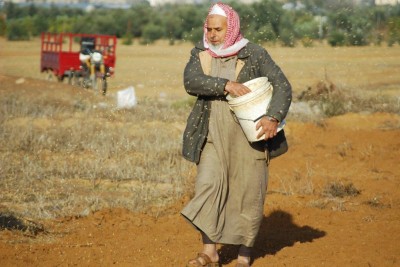 December is the time for farmers in the Gaza Strip to sow. But for those with fields near the Israeli separation barrier, it is highly dangerous. Sure enough, we were met by news that an 18-year-old was shot an hour earlier when he was checking his bird nets here in Khuza’a in the southern part of the Gaza Strip. To sell small birds can earn a few bucks, but also makes the hunter the hunted. This one was lucky. For him, a day’s hospital visit was enough.

That our presence and our yellow vests are desirable cannot be mistaken. Without any directive, some of us get up on the tractors as protection for the drivers while the rest form a row between the field and the Israeli barrier. Here the open fields were once interspersed with olive and other fruit trees, trees devastated by Israeli bulldozers. Now they can only plant wheat, a crop that grows without daily care. 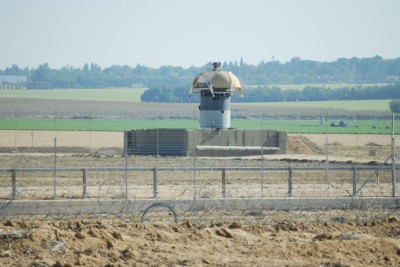 The fields to be plowed were not large, and after they been sowed, we came closer and closer to the fence. We saw the barbed wire rolled out in large circles before the fence, the towers with machine guns, the large mounds of dirt and tanks coming up behind them, the military Jeeps that stop for a moment before continuing. But we also saw the green fields behind all this, where irrigation is permitted. The contrast is great.

The work takes us closer and closer to the barrier. Activists with yellow vests still sit on tractors, but the rest of us are no longer in a row. We are now very close to the fence, so we walk directly beside those sowing by hand. It would look funny at any time, in any other part of the world, but here it is deadly serious. Maybe 70-80 meters from the fence, the ground is completely disturbed by bulldozers and tanks. Deep traces of crawlers are everywhere, some of them made earlier in the week, we are told. The tractors cannot plow there, and the farmers are not trying, either. And they can only hope that the Israeli soldiers will not tear up their fields and plow down the wheat before they reap. It has happened in the past and will most likely happen again. 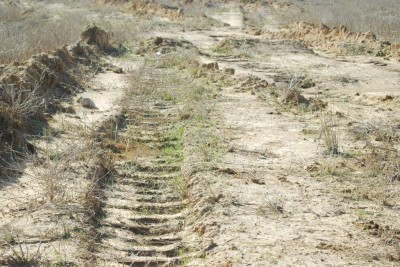 Done for the day, we walk back. Not a a single bullet has been fired at us this time. But I find one in the ground, one that didn’t find its target, and show my Israeli souvenir for the others. But no one reacts significantly. Someone strikes out with his arm over the fields: there are plenty of different kinds of ammunition fired here.

I try to understand how the soldier who shot early that morning reasoned. What made him shoot? Did he feet that he did his duty, believe that he erased a potential threat to the state of Israel? Did he get a pat on the shoulder from his commander, or backslapping by his peers in the barracks? When he comes home, will his proud mother serve him his favorite dish, and will his father open the forbidden cabinet to invite his to taste something stronger now then he has become a man? 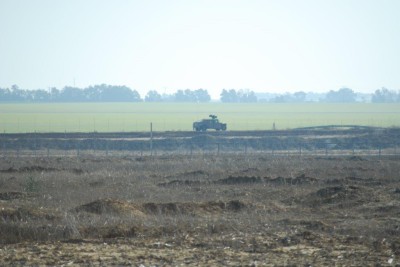 But above all, I wonder what makes them think that farmers who sow by hand are really a threat forcing the soldiers to shoot them. What makes them so afraid that they take shelter in bulletproof guard towers or tanks. How the State of Israel can be protected by bulldozing Palestinians’ fields and destroying their crops. And how to get an entire nation to believe that these farmers are a threat to their existence. I do not understand it. But I understand that our presence can mean the difference between life and death.