This afternoon in Hebron, approximately three illegal settlers, standing on the same roof as several Israeli soldiers, threw stones at Palestinian homes and cars in the old city. This act of aggression caused clashes to break out between Palestinian youth and Israeli forces, where many tear gas canisters, stun grenades, rubber-coated steel bullets and live ammunition were fired. One youth, aged 19-years-old, was seriously injured after being shot with live ammunition in the stomach. 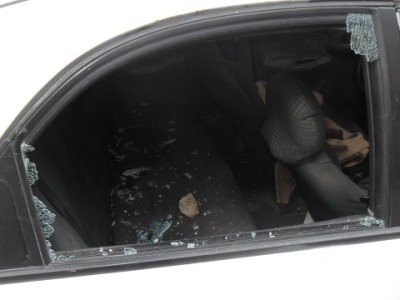 The settlers threw stones at Palestinian homes and cars in what is known as Small Shallala Street from a roof in the illegal settlement of Beit Hadassah, damaging a number of cars. This continued for at least ten minutes unobstructed by the guarding Israeli soldiers.

After a group of 5 Israeli soldiers entered the souk (market) Palestinian youth gathered and began to throw stones. The group of soldiers returned to Beit Romano military base and shortly after a further fifteen soldiers arrived and began to fire tear gas canisters and stun grenades.

The clashes continued for more than five hours with the Israeli forces escalating their aggression by firing tear gas canisters, rubber-coated steel bullet, stun grenades and live ammunition at Palestinian youth. One 19-year-old was shot in his abdomen and was taken to hospital for treatment, his condition is unknown.