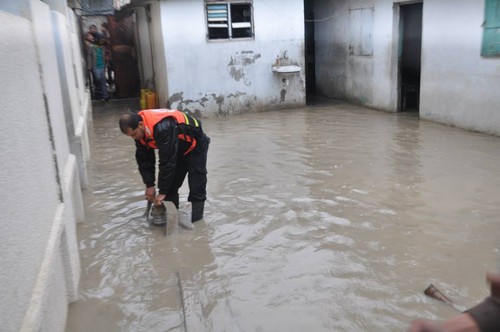 Since Tuesday, the Gaza Strip has been hit by bad weather and temperatures have fallen rapidly. Most people remain in their homes. Many stores are closed.

It is hard to go out because in many areas, the heavy rains have caused flooding and the streets have turned into rivers. In other cases, there is a danger of slipping due to hail and poor visibility. It is rare to find taxis available.

According to the department of meteorology, strong winds have reached 70 kilometers/hour. The bad weather is expected to last until Friday. Even snow is expected.

The Civil Defense Directorate said that due to the heavy rainfall, they had to rescue residents from more than 40 houses. Rain entered the houses, and Civil Defense collected the water through the pumps. Many houses, especially those in the refugee camps, are very simple. Their material is not resistant and water enters them through roofs made of metal sheets.

Firefighters also had to remove cars blocked by the rain.

The situation in the Gaza Strip, especially in refugee camps, is bad because there is a high population density in confined spaces and houses are not suited to such weather conditions.

In addition to the the flooding caused by the rain, contaminated water has flown in the streets of some areas due to the interruption of electricity that prevents wastewater treatment plants from working.

Due to the lack of electricity, residents cannot heat their homes. Many children fall ill with colds and fever because of the cold temperatures.

Our generator is switched on and off constantly, making communication with the outside world even more difficult.

Rescue operations are continuing at this time.