Sewage flows in Gaza streets for 18 hours a day 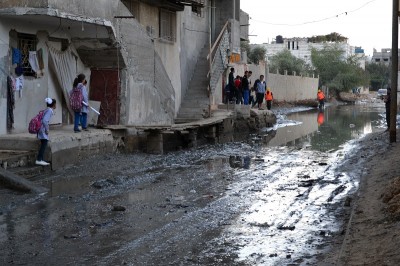 In the few hours when electricity is on, the water is again partially collected from the plant, leaving mud and putrid slime on which children walk to reach their homes. In some cases, inhabitants have built small bridges. In others, where this is not possible, people have to look for alternate routes through the neighborhood. When the system stops, sewage again starts to submerge the streets. 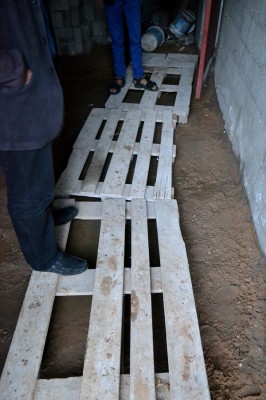 At the entrance one building, residents had placed wooden boards to walk on until they reach the stairs. The building was partially evacuated, with only a few families remaining.

“We have lived here a month, and we would like to leave,” Nadia, a young mother, said shortly before the electricity cut. “We haven’t gone out for a week. My kids are sick. I needed to take them to the hospital to see what they had. The doctor told me they contracted an infection due to the dirty water. They had high fevers. Their temperature was over 40 degrees.” Nadia has three daughters and one son. During the night, they can’t sleep because of the stench of sewage. There are also insects and rats.

The waste water also flooded a farmland on which many olive trees are planted. If the emergency is not solved, the land will be irreversibly contaminated. The pumping station, which is used to transfer wastewater from the center to the south of Gaza City, was flooded.

Much of the fuel arrived in Gaza through the underground tunnels connecting the Gaza Strip to Egypt, now almost totally destroyed by the Egyptian army. Israeli fuel, which is twice as much, costs too much for most in Gaza to afford. 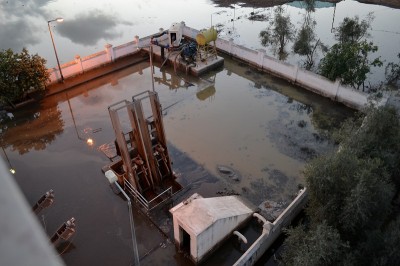 The only power plant in the Gaza Strip can work for limited periods. In coming days, the supply of electricity is expected to be further reduced from six to four hours per day. “A disaster, a catastrophe,” children in the Zeitoun neighborhood repeated. Employees of the municipality worked with boots and gloves. Other wasterwater treatment facilities may stop if their generators also run out of fuel.

The humanitarian conditions in the Gaza Strip are deteriorating. The energy crisis affects all the daily needs of the population. Israel has kept the Gaza Strip under siege for over seven years, imposing restrictions on exports (almost zero) and imports of goods, fuel, building materials and other necessities, thus creating increases in unemployment, poverty and aid dependency. 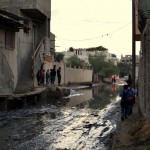 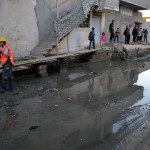