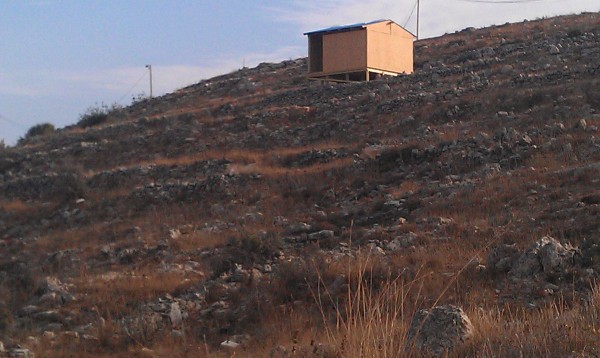 This is the newest settler house to be constructed on what was previously Palestinian farming land (Photo by ISM).

The attempted expansion of Kiryat Arba, the largest settlement in Khalil (Hebron), threatens to further reassign land boundaries. This would affect the livelihoods of several Palestinian families who have long been subject to harassment and violence.

On Tuesday 5th November, international activists were called to the Tamimi family olive groves in Khaled Abudee, which are located in a valley just north east of Kiryat Arba. Settlers from Havat Gal, the outpost of Kiryat Arba, had entered the land which belongs to three Palestinian families. They had brought with them equipment to cut down olive trees, but fortunately the Tamimi family managed to prevent any damage being done to the trees. The family called upon Israeli soldiers to remove the settlers but they persistently refused, claiming that they had a right to the land.

Israeli authorities arrived on Thursday 7th November in order to mark out the land boundaries, and a high ranked military officer came and confiscated a proportion of the land for governance use, which in practice means that settlers can build there without Israeli government intervention. Fortunately for the settlers, the house they are currently building is located on this piece of land. The families are very upset with this decision made by the Israeli military, and a lawyer from the Israeli NGO Taayush is taking the case to the Israeli court.

The conflict over this piece of land has been relentlessly affecting the families for more than six years. Every year fruit trees have been cut down and poison has also been used to prevent their full harvest. In 2008, eight children were hospitalized after drinking the milk of a goat which had been feeding on these poisoned grounds. Further physical violence has occurred several times, including children being beaten (most recently yesterday) and the use of pepper spray against an elder member of the Tamimi family. Despite the settlers’ aggressive behaviour, the Israeli authorities have only ever arrested Palestinians on the land. Three of the Tamimi sons were arrested last month for filming settlers entering the family grounds. Approximately half a year ago Shakir, Shukri and Shihab Tamimi were interrogated in Ofer Prison for supposedly hitting settler children, but were released after 24 hours when a video of the incident proved that in fact it was the settler children who attacked the Palestinians. The settlers received no repercussions for their offences, which is typical of the protection of these extremist illegal settlers by soldiers and police, even when acting outside of the law. The families now hope for some justice in the Israeli court.