At approximately 2:30 pm, Palestinian demonstrators and international activists assembled in front of the illegal settlement of Qedumim. After about 30 minutes, the Israeli army began shooting a huge amount of tear gas into the fields and on the main road, trying to prevent the demonstrators to exercise their right to protest and express their opinion.

After one hour of sustained tear gas fire, part of the demonstration slowly moved back to the middle of the street as the soldiers were taking position on the top of the hill in order to better target the demonstrators. A few demonstrators stayed on the road, facing the rest of the soldiers. Suddenly, the Israeli army started throwing stones, followed by more stun grenades and tear gas rained down on the Palestinians citizens of Kafr Qaddum.

Despite the continued Israeli assault, the demonstration lasted until 5:00 pm. Two Palestinian citizens were injured, both on the legs. One of them, directly hit by a tear gas canister, has been admitted to Nablus hospital. 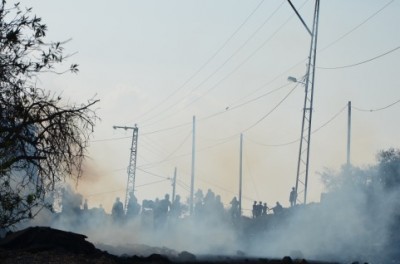 A cloud of tear gas in Kafr Qaddum