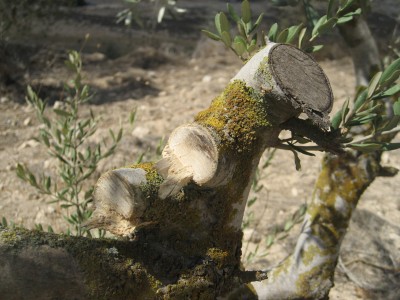 Some trees were left completely destroyed in Deir Sharaf, Palestine.

On the 5th of October, local farmers discovered that the olives from more than one hundred trees had been stolen, and that another ten trees had been damaged or destroyed. Abu Huwar farm, belonging to Yasser Fuqaha, Sidqi Fukaha, Mustafa Fuqaha and other farmers from the Meri family.

A local factory worker reported that he had seen two buses loaded with settlers pull up and unload next to the farm, in the night between the 3rd and 4th of October. About 150 metres into the field the olives had been swiftly picked from the trees, leaving small amounts on the tops, and the damaged trees bore markings from sharp-edged cutting tools. Yasser Fuqaha reported that the amount stolen from him represented about three quarters of his expected total yield, a devastating blow to his income. This attack precipitated the start of the olive harvesting season, and puts pressure on the local farmers to start harvesting the olives before they have reached optimal ripeness.

Abu Huwar has not had an easy run over the years. The local Palestinian farmers reported that, in 1996, the part of the olive grove that was on the other side of the hilltop (itself the location of an illegal settlement) had been completely uprooted by radical settlers and moved into various places on the other side of the 1967 Israeli border. Also, in the period 2000-2008, the farm and surrounding farmlands had been closed off from Palestinians by the Israeli military.

A national symbol, the olive tree represents the most essential source of income and sustenance for many Palestinians. The destruction of olive trees and theft of its yields is a serious crime and a huge loss for the local farmers.