Dozens of Palestinian children marched in Gaza Friday evening before holding a candlelight vigil outside the Palestinian Legislative Council (PLC). 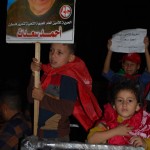 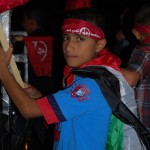 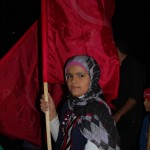 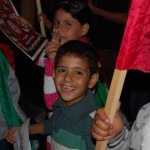 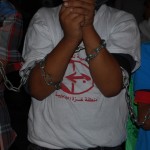 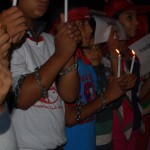 The event was the first in a global week of action to free Ahmad Sa’adat and other Palestinian prisoners held by Israel.

Sa’adat, an elected PLC member and general secretary of the Popular Front for the Liberation of Palestine, was captured by Israeli forces on 3 March 2006.

During his trial by an Israeli military court, Sa’adat refused to recognize its authority, cooperate with it or answer its questions. On 25 December 2008, it sentenced him to 30 years in prison for leading an organization banned by the Israeli occupation.

The Israeli prison service held Sa’adat in isolation for over three years, from March 2009 – May 2012, releasing him into its general population only to end a a mass hunger strike of more than 2,500 Palestinian detainees from 17 April – 14 May 2012.

An earlier mass hunger strike against isolation, led by Sa’adat from 25 September – 18 October 2011, ended with the prisoner swap that freed 1,047 Palestinian political prisoners in exchange for an Israeli prisoner of war.

Protests and other events demanding his release, coordinated worldwide by the Campaign to Free Ahmad Sa’adat, will continue through 26 October.