Cars burnt by settlers in Huwwara

In the early hours of 1st October settlers from the settlement of Bracha set fire to two cars parked outside the house of Edrees Shehadeh in Huwwara. This attack forms part of a sustained campaign of intimidation against the village, which includes the 2002 murder of Adnan Shehadeh-Howwara, the 21 year old son of Edrees Shehadeh. Adnan was shot to death by a settler as he was standing on the roof of his family’s house. 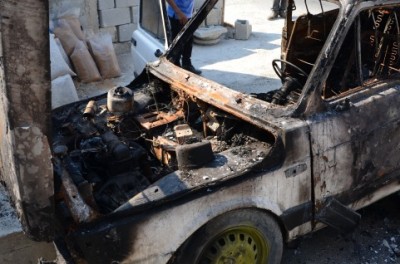 The family was woken at 2 a.m. by the noise of settlers setting fire to their car, parked among olive trees next to their house. The perpetrators ran away up the hill upon discovery and the residents managed to put out the fire. The other car, a white Fiat, was completely destroyed.

A plastic bottle containing gas and a box of Israeli branded matches was found on the ground next to the car that was saved. This car was parked next to the children’s room, and the smoke from the fire could have harmed them if it had not been put out so quickly. In recent years 12 cars belonging to the family have been set alight.

Other recent settler attacks to this village include stone-throwing at a house situated even closer to the settlement. Additionally more than 30 olive trees growing on the hill were damaged with axes, killing many of them and resulting in loss of livelihood for the owners.