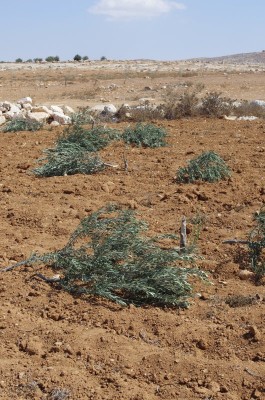 The olive tree grove belongs to Ali Shetat from Qawawis and had been planted six years ago. At 10 am yesterday morning the owners, several internationals and B’tselem staff members gathered near the destroyed trees, waiting for the police. After 20 minutes the Israeli police and army arrived on the scene and documented the incident.

On May 10, 62 olive trees were cut during the night in a field next to bypass road 317, near the village of At Tuwani. On a small wall near the olive grove the slogan “price tag for those who steal” was found. The “price tag policy” (Hebrew: מדיניות תג מחיר) is, according to B’tselem, the name given to “acts of random violence aimed at the Palestinian population and Israeli security forces” by radical Israeli settlers.

The number of Palestinian-owned trees uprooted and damaged in the South Hebron Hills area from the beginning of 2013 now stands at 139. This is a substantial increase over 2012, when 101 olive trees were damaged.

Just in the last two months and right before the olive harvest season, 22 olive trees were destroyed in this area.

Olive trees are an essential resource for the Palestinian community in the South Hebron Hills area, and their damage causes serious economic loss.