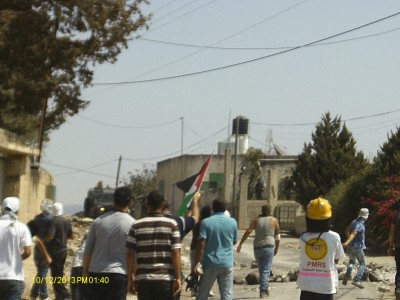 Protesters marching along the road (Photo by ISM)

The residents of Kufr Qaddum held their weekly Friday demonstration despite increased repression by the Israeli army in the last two weeks.

At approximately 10:00, more than 80 soldiers in nine military jeeps arrived in the village and positioned themselves on the top of the hill overlooking Kafr Qaddum and on the closed road that leads to the illegal Israeli settlement, Qedumim. The soldiers shot both tear gas canisters and sound bombs before the demonstration even began. Twenty-five year-old Nisfat Mahmoud Ishtawi was struck in the head with a tear gas canister and received medical attention.

During the midday call to prayers, soldiers overlooking Kafr Qaddum repeatedly shot tear gas in the direction of the mosque and many canisters fell into the yard and surrounding houses, despite the fact that there were no clashes with demonstrators at that time. Four weeks ago, Israeli forces fired tear gas directly into the mosque and many people attending the Friday prayer suffered from tear gas inhalation and had to receive medical treatment.

When the demonstration began, protesters from Kafr Qaddum and international and Israeli activists marched toward the closed road where they met extreme army repression. Israeli forces excessively fired tear gas, at times shooting tens of canisters at once toward the protest. Many protesters suffered from tear gas inhalation. As the army surrounded the protest, Israeli soldiers stationed themselves at the entrances of several houses and the residents were unable to leave or return to their homes due to the army presence. Moreover, Israeli forces continuously fired tear gas canisters inside and onto the roofs of several houses which border the road. Paramedics from Palestinian Medical Relief Society repeatedly came to the aid of residents suffering from tear gas inhalation in their own homes, including children and the elderly.

As protesters attempted to reach the area of the road closure on the eastern edge of the village, Israeli forces brought a bulldozer and several army jeeps to prevent the demonstration from continuing. When the demonstration ended, no protesters were arrested and the injured were expected to make a full recovery. 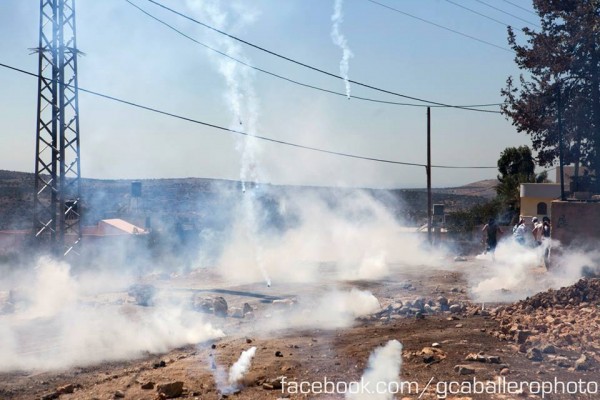 The army has been stepping up attacks on Kafr Qaddum in recent weeks. Last week the army were very aggressive on the demonstration gathering on the hill and firing teargas canisters at a low level so demonstrators would not be able to see them when fired, increasing the chance of being hit and seriously injured. In that same demonstration, the army drove jeeps down the road firing multiple teargas canisters at people, injuring demonstrators and journalists. One man was hit on the head by a teargas canister and a journalist was shot in the foot. Activist Murad Ishtawi was also shot in the leg and had to be taken to hospital and is still recovering from his injury. The jeeps were driven far into the village where the soldiers shot indiscriminately. One teargas canister broke through the window of a house and the inhabitants, who were the sick, elderly, women and children, had to be helped to evacuate, suffering from suffocation from the gas.

On the 11th September the Israeli occupation forces invaded Kafr Qaddum at 3.30am where they arrested three people, 21 year-old Maen Taha Amer Qdoumi, 24 year-old Fadi Basim Jomaa Qadoumi and 16 year-old  Ahmed Mohammed Barham Qadoumi as collective punishment for the ongoing demonstrations. The arrests show an escalation in aggression since the last arrest of three people on the 14th August including a 17 year-old child , Omran. Significant is the arrest of Ahmed, a minor, as children arrested are treated similarly to adults in the military court system and are disproportionately targeted for arrest by the Israelis.

One man was hit on the head by a teargas canister (Photo from www.facebook.com/gcaballerophoto)

Arrests and repression continually target the inhabitants of Kafr Qaddum who continue to resist the theft of their land. Demonstrations started in July 2011 after the road that connected the village to the main city of Nablus was made settler-only. Residents of Kafr Qaddum have to make a longer journey to the city which resulted in the deaths of two residents due to the delay of reaching the hospital in Nablus, showing the need and determination of demonstrators, for the historical road to be returned.