Settlers burnt around 35 olive trees in the Palestinian village of Sarta late on Thursday night, following the area being declared a closed military zone in preparation for the construction of a new settler road. 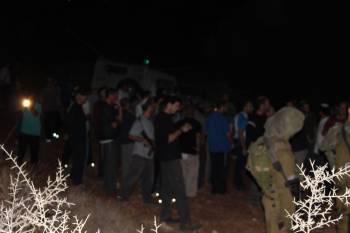 Around 60 settlers from the illegal Bruchin settlement and surrounding area, many armed with guns, set fire to the trees late on Thursday 26th September. At around midnight, the settlers arrived in Sarta. The town mayor asked the Palestinian Authority to liaise with the Israeli army in order to intervene, but when Israeli forces arrived on the scene they informed villagers that the area had been declared closed and told them to leave.

Two days earlier, town residents witnessed four bulldozers arrive in the village to prepare the ground for the construction of the road, which will connect the settlement with road five and is part of an expansion plan for the settlement which will take it from 40 houses to around 550.

The proposed road and settlement expansion is a source of concern to local Palestinians, who stand to lose much of their land under new plans, including local features such as a 500-year-old cemetery.