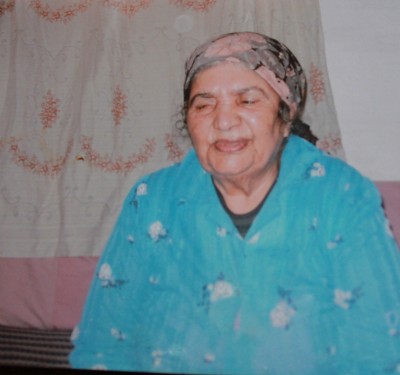 On the 2nd of August, Amena Abed AlFatah Abed Rabo passed away in Hebron. She was 71 years old and suffered a stroke. However, Amena might still have been with us, had the Israeli military let the ambulance through the many checkpoints. The journey to the hospital that should have taken three minutes was prolonged by more than one and a half hours due to restrictions and harassment by Israeli occupation forces. Amena died in the ambulance before reaching proper care. This incident was merely the last of many injustices that marked Amena’s life from the age of seven.

Amena Abed AlFatah Abed Rabo was originally from the Khema neighbourhood of Ramle in current Israel. She was seven years old when the war broke out in 1948. Her family was forcibly driven from their home following the creation of the state of Israel. In the chaos that followed, Amena was parted from her family. At the time she was blind in one eye, causing her to be easily disoriented. In her distress she fell and also lost sight in her good eye, leaving her completely blind. Amena spent a month on her own, before a friend of the family recognized her on the street and reunited her with her mother, father and three siblings.

Reunited, the family fled to the West Bank city of Hebron in an attempt to start a new life. The family was never offered any compensation for the home they were expelled from, nor the land taken from them and upon reaching Hebron they spent three years living under a tree. Amena was one of many unrecognized refugees within Palestine.

In 1951 Amena’s brother had managed to save enough money to buy the family a house, in which she lived the rest of her life. For a period Amena’s life was relatively calm in Hebron, but this changed following the outbreak of the first intifada in 1987. At this time, the Israeli occupying forces in the West Bank constructed roadblocks throughout the city of Hebron and made it impossible for Palestinians to drive within the city. To Amena this meant she could no longer leave her house. Due to her invalidity she needed a car get around and this was no longer permitted to Palestinians.

These roadblocks are still intact today and are part of the reason Amena did not make it to the hospital in time. During the last years of her life Amena lived with her nephew’s family of ten, in what is now the Israeli controlled H2 area of Hebron. Five days prior to her death, her nephew took her to the hospital where she spent three days. As she got a little better the doctors allowed her to go home. But the following day Amena suffered a stroke. The family immediately called for an ambulance.

As it had not arrived after thirty minutes, the family called once again. They were told that the ambulance had left on time but had been held back at the checkpoint.  The soldiers guarding the checkpoint would not let them through without a written permit, even though Red Crescent ambulances should be able to pass freely without question. After another thirty minutes the ambulance personnel did manage to persuade Israeli soldiers to let them through but only until the next roadblock.  This meant that the family had to carry Amena from their house to the roadblock. This path is rocky and hilly and it took the family another thirty minutes to get there. Finally in the ambulance they were once again stopped at the very same checkpoint that had withheld the ambulance earlier, this time for fifteen minutes. All in all, the trip to the hospital was delayed by approximately an hour and forty five minutes. This trip, from the family home to the nearby hospital of Al Khalil, would have taken three minutes if protocol had been respected.

Upon arriving to the hospital doctors quickly realised that Amena’s condition was now so critical that she had to be taken to a hospital with more expertise. This hospital, Al Ahlil, is only seven minutes away, but Amena died on the way.

During the last couple of days, Amena’s family has held her funeral, but the grief is still with them. Her nephew, Rami Abed AlFatah Hamdan, is a human rights student and is considering filing a complaint in the hope that this will not happen to another family in the future. As he says, having unrestricted access to ambulances is a human right, a right that needs to be enforced in Hebron.  He feels he has nothing left to lose, and this incident has only confirmed his resolution to work with human rights. When asked if the soldiers have expressed any guilt, he simply smiles sadly and says: “If they felt guilt, they would never have stopped the ambulance”.

Unfortunately this is not an incident that stands alone. Ambulances in the Hebron area are often withheld and harassed when trying to reach patients. Hence, in 2008 a woman gave birth at a checkpoint and the same year a man died without receiving medical care. Nor is Amena Abed AlFatah Abed Rabo’s story as a refugee within Palestine unusual.  Despite peace talks in Ramallah,  Israel continues its plan to demolish 30,000-40,000 Bedouin homes as described in the Prawer Plan and has just approved a 1,000 new settlements in the West Bank.

Stories like Amena’s are a symptom of the Israeli occupation forces systematic attempt to drive Palestinians from their homes and make their lives as difficult as possible. This is part of a policy of ethnic cleansing aiming to expel all remaining Palestinians and Arab Bedouins from Palestine. The internationally recognised researcher and author Ilan Pappe describes this in his book “The Ethnic Cleansing of Palestine” and in interview with the ISM:

But then I checked the American State Department website about ethnic cleansing and the description of what ethnic cleansing is and it fitted so well with what was and is going on in Palestine. This description does not only describe an act of expulsion but also its’ legal implications, which is in this specific case, is a crime against humanity. It also says very clearly that the only way to compensate an ethnic cleansing is to ask the people who were expelled whether they want to return or not.