Updated: ‘Day of rage’ against Prawer Plan met with violent repression and over ten arrests

Update 2nd August: The Palestinian activist arrested at the protest near Hizma checkpoint has been released after paying 3000NIS. All arrestees at the demonstration in Wadi Ara have also been released but will have to be under house arrest for three days.

On August 1st, ‘day of rage’, thousands of people took to the streets to denounce the ethnic cleansing of a conservative estimate of 40000 Bedouins from the Naqab; the so called Prawer Plan.

The demonstration organized in the Naqab itself took place in the South Rahat Junction “Lehavim”. The start of the protest, which was scheduled for 4pm was delayed, after police blocked several roads leading to the demonstration and alternative routes had to be found. In the end over 1500 people from all over historic Palestine and international activists managed to assemble and voice their anger against the ethnic cleansing and forced displacement of over 35 villages in the Naqab region. Strong slogans asking for a stop to the ethnic cleansing, a change to the Prawer Plan and freedom for the Naqab and Palestine were chanted. 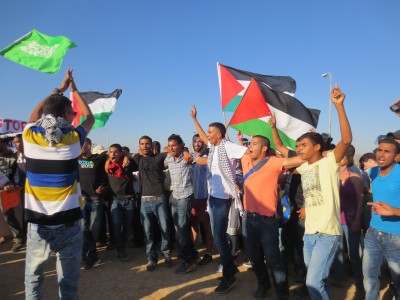 Protest chanting at the demonstration in the Naqab (Photo by ISM)

The protest was heavily policed, with over 200 police officers, several of them on horseback. Even though the protest was conducted peacefully, two minors, Hisham A’mor and Khaled Nasasra, were arrested and released this morning.

In Wadi A’ra, Haifa District, the demonstration took place at the A’ra-A’ra’ra intersection with around 1500 participants. Israeli forces beat protesters and used teargas against them. Eleven people were arrested and will probably have the court hearing today in Haifa.

The ‘day of rage’ not only spread throughout historic Palestine. Solidarity actions with the Palestinian Bedouins crossed the Green line as dozens of people protested near Hizma Checkpoint in the occupied West Bank.

At around 3pm, several buses departed from Ramallah towards the Naqab to join the protests against the Prawer Plan. As expected, Israeli forces stopped the buses from continuing their way near Hizma checkpoint.

Demonstrators went off the buses and protested on the road leading to Hizma checkpoint. Over twenty special unit police officers and several soldiers threw several sound bombs, violently pushed protesters and beat several people with batons. One female protester was kicked by a police officer in the back and another activist was arrested. Standing on the sidewalk of the road and chanting slogans against the ethnic cleansing of the Naqab, demonstrators were surrounded from all sides by Israeli forces until the buses arrived and everyone left. It is worth mentioning that the bus drivers were fined by Israeli police with 750NIS fine each. 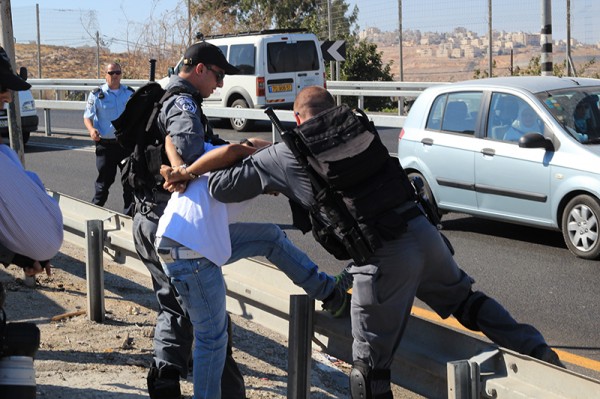 Late at 9:30pm, more than 300 people gathered at Damascus gate in East Jerusalem. Protesters chanted slogans in solidarity with the Bedouins communities in the Naqab and marched into East Jerusalem towards Sheik Jarrah. The demonstration turned back towards the Damascus gate again, after it was blocked by a large number of mounted police. Israeli police repeatedly charged the demonstration and threw sound bombs at people. They also deliberately threw sound bombs into the crowded area outside the gate, and into restaurants and market stalls. This caused a huge stampede of people running away from the police, and caused one middle aged woman to feint from shock.

These protests come after July 15th first ‘day of rage’ in which a general strike in historic Palestine was called and numerous demonstrations against the Prawer Plan organised.

The Prawer Plan making its way through the Israeli Knesset aims to destroy 35 villages that it does not recognise. The destruction of these ‘unrecognised’ villages will forcibly displace a conservative estimate of 40 000 indigenous Palestinian Bedouin for already pre approved Jewish only settlements in the Naqab (Negev).

Historic Palestine’s Bedouin population are the indigenous population of the Naqab. Their cultural and historical link to the land is clear, given that since settling in the Naqab in the seventh century, they have been the only inhabitants of the desert up until the mid twentieth century. Before the creation of Israel in 1948 over 100000 Bedouin lived in the Naqab and made up over 99% of the inhabitants. The establishment of Israel as a state with a Jewish majority needed the ‘Nakba,’ or catastrophe that meant the ethnic cleansing of hundreds of thousands of Palestinians including 90000 Bedouin in the Naqab, who were forced to leave their historic land to become refugees in the West Bank, Gaza strip and other countries in the world. After the Nakba the 10 000 Bedouin who managed to survive the ethnic cleansing were put under the authority of an oppresive military regime that forcibly removed the remaining Bedouin into an area of land called the ‘syaj’ or (fenced) in a triangle marked by the towns of Beersheba, Arad and Dimona. 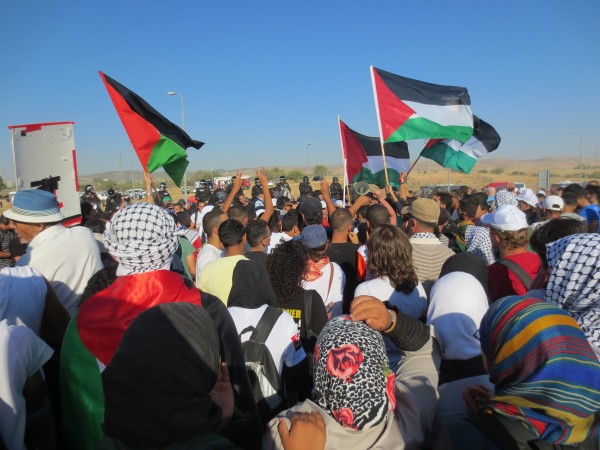 Demonstration in the Naqab (Photo by ISM)

In 1965 Israeli authorities passed the ‘Planning and Building Law.’ One aspect of that law was to map out all the existing communities that fell under the state and although many of the villages had existed before the creation of Israel, or had been created by the Israeli army as part of the population transfer to the Syaj zone, they were left of the map and so became ‘unrecognised’ villages and illegal by law.

Over 40 000 Bedouin currently stay in these ‘unrecognised’ villages, that because of the nature of their illegality under Israeli law, have no access to  infrastructure like roads, water, sewage, electricity, education and healthcare although they became citizens of Israel. The other 105 000 Bedouins live in urban townships, or concentration townships that have some of the highest poverty and crime rates in the country, created in 1969 to encourage the Bedouins to relinquish their land rights. The Bedouin who accepted were internally displaced refugees who were not allowed to return to their ancestral lands outside the Syaj zone.

Israel uses a manipulation of an old Ottoman law that declares non cultivated land as dead land and so transfers land to the ownership of the state. The land outside the Syaj area became dead land due to people unable to return and so passed to control of the Israeli state without consultation with the Bedouins. In the 1970s the public were allowed to file ownership claims over the land and so the Bedouin filed 3221 claims for a total of 242 750 acres. The process was then frozen and never offered again. Those lands claimed are subject to be lost under the Prawer plan but only those that were allowed to be registered for a short time in the 1970s are able to be compensated though the Prawer Plan. This compensation however is only to the maximum of 50% of worth that reasonable estimates believe will only amount to 16% in real terms. This is on the condition that they relinquish all rights of their ancestral land and move to the townships or the 10 ‘recognised’ villages.

The current situation of the Prawer Plan represents the largest single ethnic cleansing of Palestinians since the Nakba and highlights the plight of the indigenous peoples of Historic Palestine who remained in the 1948 borders with the creation of Israel. The situation of the Bedouin in the Naqab have long been subject to hardships in spite of formally existing as Israeli citizens, but have still lived in similar circumstances to their kin in the West Bank and Gaza. In 2011, 1000 houses were demolished and since the 1970s the Bedouin have been harassed and attacked by ‘Green Patrols’, a miltary unit set up by Ariel Sharon as part of the Agricultural ministry to specifically target Bedouin, and in recent times these duties have been taken over by by settlers from Kibutzes in the Naqab who often attack and intimidate the population. The Prawer Plan and the discriminatory laws and tactics used against non-Jewish citizens of Israel highlight the concerns of Israel’s demand to be recognised as a Jewish State in the ‘peace’ talks. Non-Jewish citizens are already being internally displaced through pogroms and discriminatory laws. Recognising Israel as a Jewish State will confirm that they are unequal and do not belong, regardless of their indigenous status and history of the land.