Update 10th July: The military judge decided on house arrest for Nariman Tamimi. She will have to stay at home every Friday until the next court hearing in September. Rana is not allowed to go to Nabi Saleh at least until her next hearing next week. Both are charged with entering a closed military zone. Rana is also accused of interfering with a soldier.

Update 8th July: The judge’s decision was partial house arrest for last Friday only. Tomorrow they are having the final hearing before the case is closed.

Update 3rd July: Rana and Nariman are still waiting for the judge decision on the appeal. They had to paid 750NIS more for bail.

Update 2nd July: The military judge decided on house arrest for Nariman and Rana. The defense has appealed and is still waiting for a decision.

Update 1st July: Both Palestinian activists have been released on bail (2000NIS each) from Ofer military prison. They are being charged with entering a “close military zone” and have a trial on Tuesday and Wednesday.

Update 30th June 3:30pm: Both Palestinian activists were released by the court; however the Israeli Police appealed the decision which means they are to be held another night, this time in Ofer Prison.

Update 29th June 09:00am: The two Palestinian activists are currently being held at Jalameh prison. They may or may not have court on Sunday but will not be released before then.

Update 29th June 2am: The international activist arrested at the protest was released last night.

During the June 28th demonstration in Nabi Salih, after Friday prayer had finished, the Palestinians once again began their resistance against the illegal Israeli occupation. As usual, their demonstration was met with high levels of violence; disproportionate teargas was fired and foul smelling skunk water was shot onto homes. Two Palestinians and one international were arrested. They are currently being held in Binyamin police station.

At around 1:30 pm demonstrators began marching towards the stolen water spring of Nabi Salih, currently occupied by Israeli settlers from the nearby illegal settlement of Halamish. As soon as the demonstrators began to descend the mountain, two military jeeps began using their tempest tear gas attachments, firing excessive tear gas canisters directly at unarmed marchers. The military jeeps then began to aim directly at those who chose to stay on the road, shooting canisters at head height and disregarding the flammable nature of the local petrol station. The skunk truck and two jeeps then invaded the centre of the village, including the olive groves [as seen in video] which then allowed the skunk truck to maneuver freely, shooting at all homes and demonstrators in its wake. 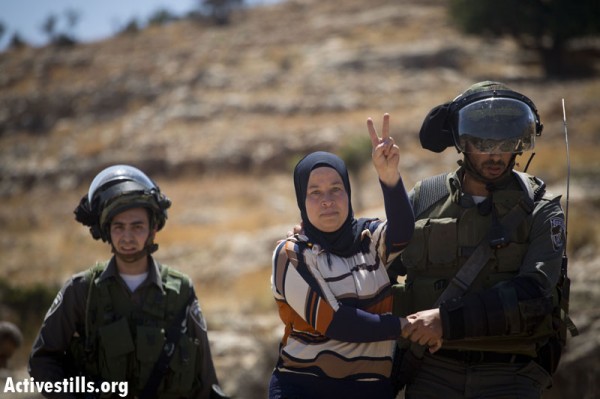 After this, those demonstrators that had reached the bottom of the mountain close to the spring were faced with a large group of soldiers. Demonstrators confronted the soldiers; however as the video shows, the soldiers disregarded the rights the Palestinians have to their land and proceeded to aim their weaponry at demonstrators. Two Palestinian women, including prominent Nabi Saleh activist Nariman Tamimi, and one international man, believed to be from Spain, were arrested for no reason other than resisting the occupation. It is currently understood that these three have been transferred to Giva Binyamin police station, where they are still currently being held.

The village of Nabi Salih has been demonstrating against the theft of the natural spring and the occupation since December 2009. Israeli forces violently suppress the weekly Friday protests by shooting tear gas canisters, skunk water, sound bombs, rubber coated steel bullets and even live ammunition at protesters. Two people have been killed, Mustafa and Rushdi Tamimi, and many others severely injured. Resident Bassem Tamimi, has spent 17 months in Israeli jails, merely for being a prominent activist at the protests. After more than three years and despite the repression, Nabi Saleh continues to fight against the injustices of a brutal military Israeli occupation.