The Israeli military invaded the village of Kafr Qaddum multiple times on Friday 26th July, firing excessive teargas, sound grenades and rubber bullets at the people of the village. They were also armed and prepared to use live ammunition against peaceful protesters. Several hours later, the village was once again invaded, this time by an Israeli military bulldozer which created a roadblock in the centre of the village, restricting freedom of movement.

At around 11am on the morning of the 26th of July, over fourty soldiers walked directly into the village of Kafr Qaddum, heavily armed with sound grenades, teargas, rubber coated steel bullets and live ammunition. They fired sound grenades and gas at Palestinians walking in the village, several hours before the village’s Friday demonstration convened. The soldiers started running at people several times, seemingly attempting to make arrests or physically attack the villagers – many of those affected by this, and by the offensive weapons that were fired, were on their way to pray in the mosque on the third Friday of Ramadan. 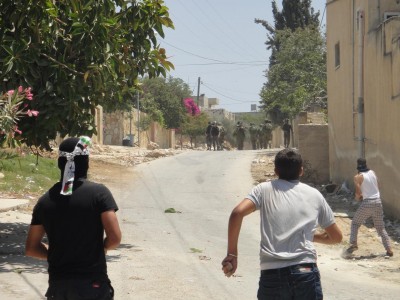 As many people of Kafr Qaddum answered the call to prayer, the soldiers who had invaded the village then occupied a hillside overlooking the village. At around 1.30 after the prayers, the demonstration gathered, with a group of around one hundred Palestinians – along with Israelis and international supporters – marching towards the hilltop occupied by the soldiers. The protesters demanded that their road be opened for access and told the soldiers of the Israeli army that they would be held accountable for their crimes in The Hague.

Youth of the village defended their homes from the heavily armed soldiers, resisting the military invasion. The soldiers fired heavy metal tear gas canisters at head height and directly towards the protesters, as well as firing plastic coated steel bullets. Several protesters suffered from extreme teargas inhalation and one was hit in the leg with a tear gas canister. Soldiers ran from the hill towards the protesters, chasing them between the houses of the village – once again seemingly attempting to arrest or attack protesters during the nonviolent demonstration.

Having chased many demonstrators out of the centre of the village, four military jeeps and a bulldozer raided the village, accompanied by around thirty soldiers on foot. The bulldozer dug up piles of dirt and stones from the side of the road, piling it into a roadblock in the centre of the village. This new roadblock would severely restrict access for villagers living east of it, meaning that they would not be able to enter or leave the village by car at all, as their eastern access to Nablus is already blocked by the settlement of Qedumim. Collective punishment, which this roadblock constitutes as it indiscriminately punishes the citizens of the village, is a war crime under the Fourth Geneva Convention. 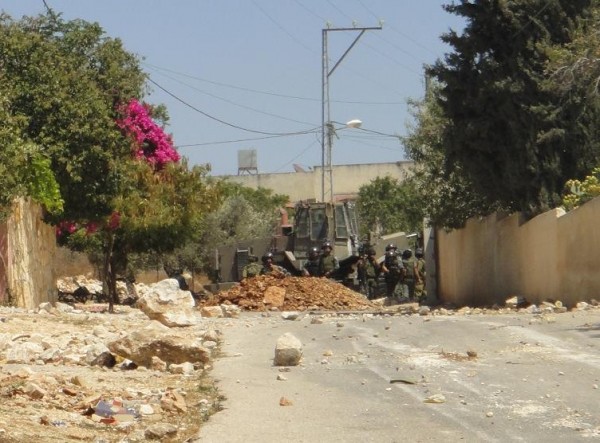 However, the resistance continued as after the demonstration ended, the village municipality prepared to remove the roadblock with their own digger. The village of Kafr Qaddum will continue to resist occupation, settlements and military violence.

Around 4,000 dunums of Kafr Qaddum land has been appropriated by the illegal settlement of Qedumim and the demonstrations started as it was threatened that this amount would increase as the settlement expanded. Kafr Qaddum’s main road was closed in 2002, making access to their neighbouring villages of Jit, Sarra and the city of Nablus impossible without a 14 kilometre detour on badly paved roads through olive groves.