Live ammunition shot at Youth Against Settlement house in Hebron

Last night at 10 pm, a live ammunition bullet was fired at the headquarters of the human rights organisation Youth Against Settlements (YAS) in Hebron. 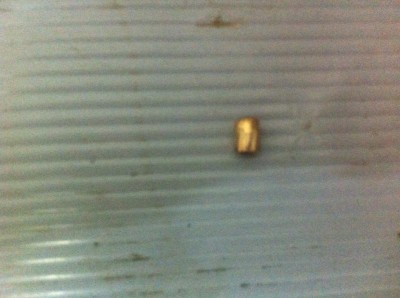 The spokesperson for YAS, Damer Atash, explains that a group of activists were sitting in front of the house headquarters when the bullet was fired. The bullet was shot  from the nearby olive groves making it impossible to see the shooter, although two voices were heard. Luckily, the group of activists were not hurt, instead, the bullet bounced off the window right behind them. “At first we thought it was a stone but instead we found a bullet”, said one of the activists.

At 22:15 pm, the group called the Israeli police, who arrived some 40 minutes later at approximately 11 pm, after the police arrived the military joined them and stayed for about 20 minutes. However, none of them searched the premises for the bullet canister.

The shooter was not seen, but it is likely that it was an attack from one of the neighbouring settlers, as the bullet was bigger than those used by the army. Even though this is the first incident of shooting against YAS, this would not be the first time the house has been attacked by settlers. They have previously tried to burn the house, set the kitchen of the headquarters on fire and uprooted trees. In these incidents the Israeli army or police have not taken any action against the settlers.

Israeli army and police also participate in the harassment of YAS and its human rights organizers. On Wednesday alone, the army invaded the house three times during the evening and night for what it is believed to be a training exercise for the army.

The despair and fear this causes is not uncommon for the 35,000 Palestinians living under complete control of 1500 Israeli soldiers and police officers, and the constant harassment and violence from the 500 settlers illegally living in the Israeli controlled H2 area of Hebron.