On Saturday the 13th of July about forty settlers on a settler ‘tour’ once again strolled through the Old City of Al Khalil (Hebron).

Today they were joined by almost as many soldiers from the Israeli army, Israeli Border Police and Israeli police force. The occupation forces kept blocking the streets, forcing local Palestinians working or shopping to use longer alternative routes or wait behind for the full hour the tour lasted. 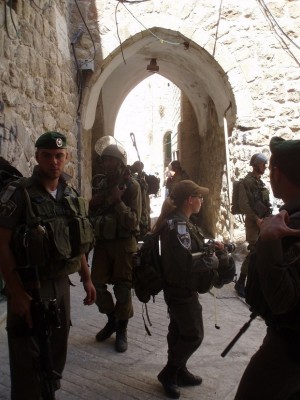 Around 1.30 pm the settler tour was preceded by the army invading a private Palestinian home and occupying their rooftop. The ‘tour’ went on through the streets of the Palestinian neighbourhoods while the heavily armed soldiers escorting the illegal settlers and Zionist tourists controlled how close the  international observers could get, to the point of threatening to throw tear gas grenades. Meanwhile soldiers prevented Palestinian men, women and children from moving through their own streets and tried to expel children from their own neighborhood. At one point a young boy tried to get through with a cart, coming from one of the shops where he was helping with work, but not even he was allowed to pass by the tour. As the settlers moved through the Palestinian residential areas, the soldiers kept intruding into Palestinian homes to enter their rooftops.

Today the settlers’ tour followed a different route than in previous weeks, following narrow streets within the old city.  Four Border Police officers remained at the back of the group, keeping international observers at a long distance from the settler group, effectively preventing much observation of the settlers’ behaviour as they entered the old city. As people started to gather behind the ‘tour’, waiting to enter homes and shops one of these officers took out a camera and started filming the Palestinian children and the international observers. At no point were people allowed to pass the settler group. 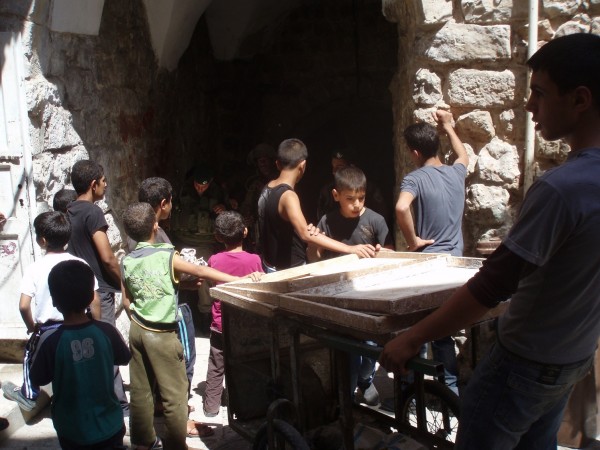 This weekly “tour” of Hebron disturbs the daily lives of Palestinians in the busy Souq of Hebron, which has seen an extreme decrease in trade since the Israeli occupation forces closed Shuhada street, which was formerly Hebron’s busiest market. Rather than closing the Souq, where there are several illegal Israeli settlements, Palestinian residents think the Israeli forces are trying to make life there as uncomfortable as possible and thus pressure them to move out of the area.