On the 28th of June 2013 two Palestinian activists were arrested in the village of Nabi Saleh during the village’s Friday demonstration. Both are currently released on bail and have been charged with entering a close military zone. The prosecutor is asking for house arrest and they are awaiting the judge’s decision. Nariman Tamimi is a prominent activist from the village of Nabi Saleh and Rana Nazzal is a Palestinian Canadian activist. The International Solidarity Movement had a chance to speak to Rana about her experiences during the arrest, the time following imprisonment and the situation for political prisoners in Palestine.

International Solidarity Movement: You, together with Nariman Tamimi, were arrested last Friday during a protest against the Israel occupation in Nabi Saleh, can you tell us in which specific context you were arrested and where did they take you afterwards?

Rana Nazzal: We attempted to reach Nabi Saleh’s water spring, which has been annexed by the nearby illegal Israeli settlement. A line of Israeli soldiers blocked our way and threatened to arrest us so we turned around and began climbing the hill back to the village. As we retreated, a different group of soldiers ran towards us and began arresting us. When I asked why we were being arrested, the soldier replied, “because I feel like it”.

Myself, Nariman, and a Spanish man were taken together. We were kept handcuffed and blindfolded for nine hours, most of the time isolated from each other. Within this time we were not told the reason of our arrest, received no food, and were transported to two military bases before we were finally taken to the police station.

There, Nariman and I were taken in a police car, handcuffed, and driven around with two male soldiers for over 7 hours before reaching Hasharon prison at 7.30 am.

ISM: There are sixteen Palestinian women currently imprisoned by Israel, all of whom are held in Hasharon – how was the encounter with these women prisoners? How did you spend your time in jail?

R.N: They didn’t keep us in the same prison ward as the sixteen other women, but we saw them in passing moments. On Saturday, we saw them while the longest term prisoner, Lina Jarboni, was giving Hebrew lessons. Lina told us that Sireen Khudiri, the recent 21 year-old who was arrested on charges of ‘internet activism’, also gives the women English lessons. On Sunday night Lina cooked the Palestinian stew mloukhieh and sent a huge platter to our room, along with changes of clothes so we could finally change. The women were generous and strong spirited.

We spent most of our time talking or sleeping, as we weren’t allowed books, paper, radio, or any form of entertainment.

On Monday we were woken at 2am and taken on a grueling trip to the Ofer military courts, along with Tahrir Mansour who also had a trial. Tahrir and I were locked in a compartment on a bus that could hardly fit the two of us sitting upright, with our ankles and hands cuffed.

After spending the day in a cell at Ofer and attending a trial in the afternoon, Nariman and I were finally released after 10 pm.

ISM: After the military court decided that you should be released, you had to pay 2000NIS in bail and were charged with entering a “close military zone”, can you tell us more about the on-going process? What is the prosecutor asking for?

R.N: The trial is still going on, we have been to court three times so far this week. The prosecutor asked for jail time or a very high bail (at one point asking  judge for 10,000 NIS!), they also asked the judge to make me postpone my travel time (as I am going to Canada soon for university). All these requests were turned down, but on Tuesday the judge asked for 750NIS bail and house arrest for one week. Our lawyer appealed the house arrest, and the prosecution appealed the bail (wanting a higher amount). The decision of Wednesday’s appeal trial has not been told to us yet. 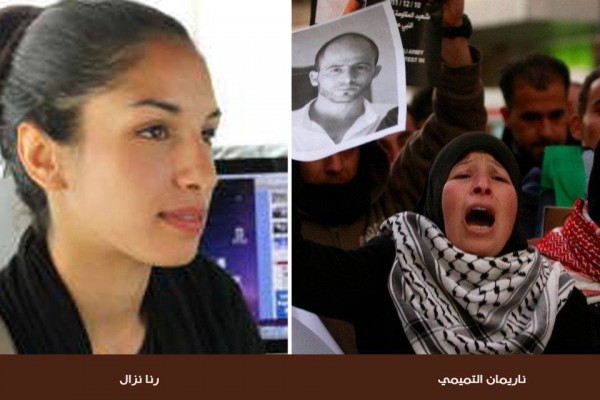 ISM: Is this the first time you have been arrested and imprisoned? If not, can you tell us about your previous experiences?

R.N: Last year I had a similar imprisonment. It was much more difficult because it was my first time and I was alone and mostly kept in isolation for a period of five days. I had been beaten by soldiers during the arrest, with bruises and cuts all over my body. I was also facing more serious charges. I was charged, among other minor things, with assaulting a soldier, but thankfully we had video evidence that proved that it was not the case. Nonetheless, the court demanded I pay a similar bail last year.

ISM: Why do you attend these demonstrations and why do you think it is important as a Palestinian and a woman to participate in those protests?

R.N: The people of Nabi Saleh protest out of a direct necessity to protect what is left of their land and reclaim what has been illegally stolen from them. I, as a Palestinian, can’t separate myself from their struggle, so whenever I have the chance to, I am happy to join them. I especially like Nabi Saleh because the women play a role in the leadership.

ISM: Do you think it is important to have international presence at those demonstrations? If so, why?

R.N: I think an international observer presence can be helpful, in particular for publishing news in English in cases where that is not already happening. I think it is important for the popular struggle to not be reliant on internationals, however, as their legal status in the country is very weak (for example, they can be deported easily if they participate directly in protests) and their presence is transient. Visible internationals may lessen the violence that is used against protesters, but Palestinian women, and large numbers of protesters in general, have a similar effect. I think it would be better in the long term if we were encouraging Palestinians to come from the nearby cities, and especially women.

ISM: Do you want to add anything else?

R.N: No matter how much I had read or written about the prisoners’ struggle before my first imprisonment, I did not fully realize its significance. Every second in solitary confinement, every minute of exhaustion and boredom, and every day away from one’s family is significant to the prisoners. We on the outside should begin to feel every second as they do and begin pushing their cause with the urgency it deserves. I call for the freedom of all Palestinian political prisoners.