On Saturday the 1st June, another group of illegal settlers of Hebron and other settler tourists invaded the old city of Hebron, a Palestinian area which is tightly controlled by the Israeli military. Palestinian homes were invaded by the soldiers and several incidents of violence and harassment were reported. 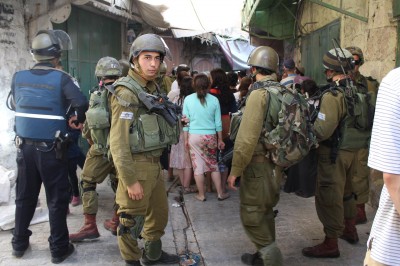 The afternoon was unusually hot and the area was quiet until around four in the afternoon at which point two groups of three soldiers appeared in the old Souq and invaded Palestinian houses, purportedly to use their roofs for surveillance. One of the homes invaded was that of a sixteen-year-old boy who was arrested last week on false charges of injuring a settler – he was in a different city at the time of the injury – and released shortly thereafter. There also was a report of a soldier beating a Palestinian man, kicking him on the head.

The “tour” proceeded from the gate near the illegal Israeli settlement of Beit Romano and through the old city. The Israeli settlers were completely surrounded by soldiers, who refused to let Palestinians through and made them travel by alternate routes. One female soldier had a dog on a leash, and several Israeli border policemen were also present and conversing with settler-tourists. It was clear from a conversation between soldiers that they were irritated by the presence of international observers. One international was also confronted by an armed settler, who demanded his passport and asked provocative questions in a clear act of harassment.

At one point, three soldiers broke from the main group and ran through the old city, intimidating people by pointing guns at passers-by. They then stormed into a Palestinian house, occupying the roof which oversees a Palestinian playground. They pointed their guns down at children playing and also trampled all over a rooftop vegetable garden, destroying a number of plants.

This weekly “tour” of Hebron disturbs the daily lives of Palestinians in the busy Souq of Hebron, which has seen an extreme decrease in trade since the Israeli occupation forces closed Shuhada street, which was formerly Hebron’s busiest market. Rather than closing the Souq, where there are several illegal Israeli settlements, Palestinian residents think the Israeli forces are trying to make life there as uncomfortable as possible and thus pressure them to move out of the area. 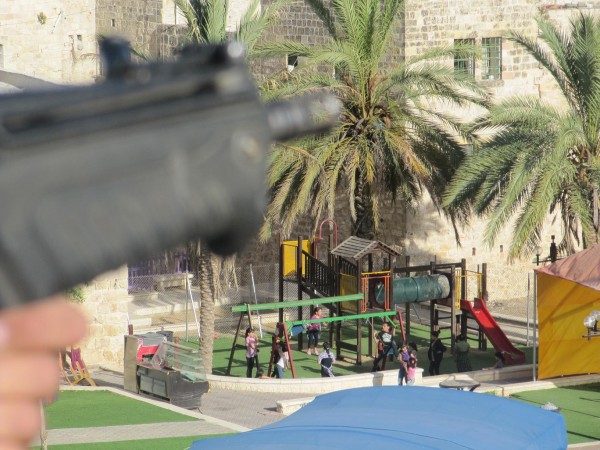 Soldier on rooftop pointing gun near playground – (Photo by ISM) 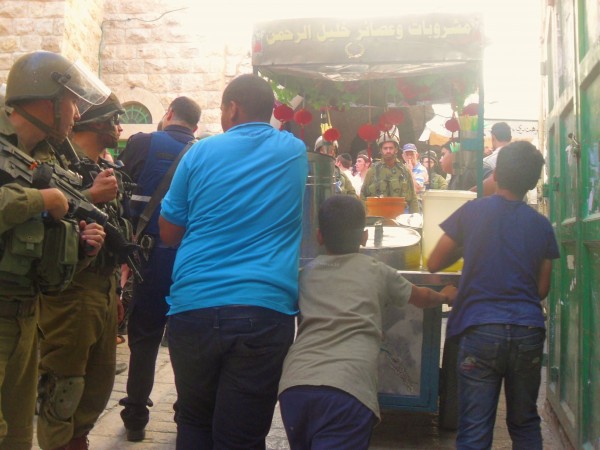 Palestinians try to take a juice stall through the souq, blocked by settlers and soldiers – (Photo by ISM)