New
Home / Hebron / ‘They have two roads on our land already, why do they need a third…?’

‘They have two roads on our land already, why do they need a third…?’

In the Wadi al-Hussein area of Hebron, Israeli occupation forces have started to build a new road ‘for military purposes’. The route of the road is from the illegal settlement of Kiryat Arba towards the city centre, directly across Palestinian-owned land. 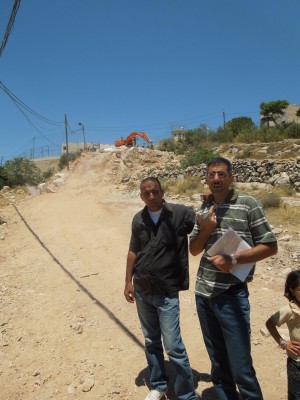 Palestinian landowners explain the destruction of their land (Photo by ISM)

A military order has decreed the construction of this road, four metres wide and more than two hundred metres long, cutting through fields of olive and fruit trees owned by the Palestinian families living there. The stipulation on the width of the road has already been broken, with the route that has been cut by bulldozers being six metres wide in places.

In contrast to the military order to build a road, Palestinian landowners have been denied the right to build on their own land. Despite gaining approval from the Palestinian Authority, the Israeli authorities (who have the final say on civil matters in area H2 of Hebron) have refused permission to build a new house. Landowners also point out that there are two existing roads from Kiryat Arba built on Palestinian land for Israeli-use only, and ask why a third is required.

When occupation forces attempted to build this road initially, landowners and others tried to stop construction by sitting down in front of bulldozers, but this non-violent protest was met with arrests, fines and imprisonment, and by the bulldozer dumping a load of earth on top of them.

Landowners complain that Israel insists on applying those aspects of the Hebron accords that benefit settlers, while ignoring those aspects covering the rights of the majority Palestinian population. Using military orders to steal land is a tactic long-used by Israel. Land seized this way then later typically becomes part of the ever-expanding settlement project. All Israeli settlements are illegal under international law, which bans the transfer of the occupier’s population into the land under occupation. 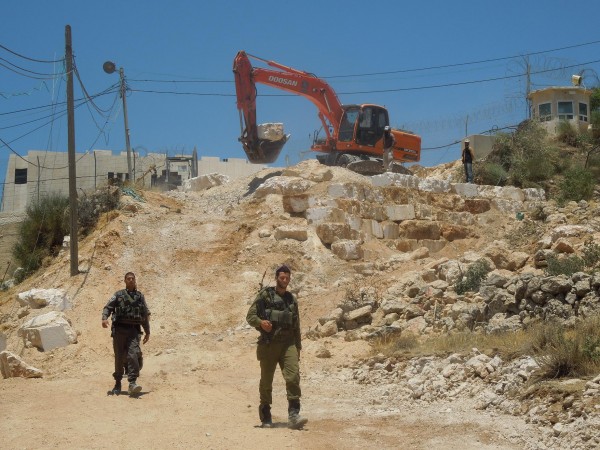