Sunday morning a young Palestinian farmer was wounded by Israeli army fire in an area called Abu Safiyeh, East of Jabalia, in the Northern Gaza Strip. 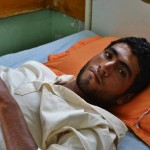 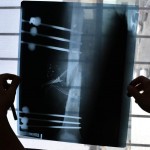 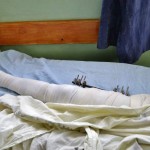 The young man, Ahmad Hamdan, 21, was rushed to the hospital Kamal Odwan. We went to visit him in the hospital where we met some of his family members.

According to his uncle Eyad Hamdan, at around 6:00 am on Sunday, June 2, Ahmad was going to pick watermelons along with four or five other workers. Ahmad’s family does not own land, Ahmad is a simple worker in the fields.

That morning there were many farmers’ families, children, and bird hunters out in the fields. There were Israeli jeeps on the border and the workers had warned of gunfire but did not bother because they were far from the barrier that separates Israel from the Gaza Strip.

Ahmad and other workers were heading to work on a wagon when the bullet hit Ahmad. He was injured before he had started work, at about 6:30 in the morning. The chariot on which he stood was about 400-500 meters from the separation barrier. The soldiers of the Israeli army probably fired from one of the towers of control, or by using a small hill behind which they often station themselves.

The cousin of Ahmad, Ammar Hamdan, 22, was with them. “When Ahmad was injured, some of them were trying to hide in order to escape from the bullets, while others were left with Ahmad and they called an ambulance. Ahmad was put in a private car and transported to an area away from danger and an ambulance arrived after 10 minutes.”

Family members told us that they used to go to work in that area 2-3 days a week to pick watermelons. “It ‘s the first time that they shot at us at that distance from the barrier. Due to the economic conditions of the family, Ahmad has to work in dangerous areas,” Eyad said.

The family of Ahmad is composed of 11 members, two parents and 9 children – 2 daughters and 7 sons. Ahmad is the largest of the children. The father did not have a steady job. His son Ahmad worked by collecting debris and other material for resale to be able to support their families. They live in Beit Hanoun, in the Northern Gaza Strip.

The bullet entered and exited from the right leg of Ahmad and provoked a femoral fracture. The doctors have placed an external fixation on the leg. Inside the leg there are bone fragments. Relatives told us that the doctors will then evaluate the condition of the muscles and nerves.

“After what we saw we did not return to work there”, said Eyad. Beside the bed of Ahmad was sitting her aunt and her tears would not stop falling.

After the visit we met Dr. Ahmad Bassam Al Masri, Head of Orthopaedics Department of the hospital Kamal Odwan. Dr. Al Masri told us that Ahmed suffered a compound fracture of the right femur. It is a third degree open fracture, which does not require neurovascular injury. The open wound measured about 10-15cm across. Dr. Al Masri told us that the doctors had placed an external fixation in the leg and that Ahmad will require a new operation in which the external fixation is removed and they will place an internal fixation and carry out a bone graft. This second operation will take place in around 2-3 weeks or a month. After surgery, rehabilitation will last from six months to a year. “The blow of a firearm delays the formation of the bones. Generally a normal fracture requires 4 months of rehabilitation,” explained Dr. Al Masri.

The agreements for the cease-fire reached after the Israeli military offensive “Pillar of Defense” on November 2012, established that the Israeli military forces should “refrain from hitting residents in areas along the border” and “cease hostilities in the Gaza Strip Gaza, by land, by sea and by air, including raids and targeted killings.” However, Israeli military attacks by land and sea have continued since the very day of the cease-fire. Since the beginning of the ceasefire there have been 4 civilians killed and more than 90 injured in the areas along the border.

In 2005, Israel unilaterally and illegally established a so-called “buffer zone” inside Palestinian territory, an area that farmers cannot access and that is reinforced by the Israeli army firing on civilians in the area. As reported by the Palestinian Center for Human Rights, preventing the access of Palestinians to their land and maritime areas violates numerous provisions of international humanitarian law, including the right to work and the right to a dignified life. These attacks against the civilian population continue amidst a deafening silence from the international community.

We will continue to expose these violations until the Palestinian people are entitled to the same rights as anyone else, such that the world will one day understand the tears of the many bereaved mothers of Gaza.