Ni’lin: Words versus the occupation

On Friday, 14 June, around fifteen residents of Nil’in marched toward Israel’s apartheid wall in the latest of it’s regular protests against the systematic confiscation of their land via the wall and five surrounding Israeli colonies. 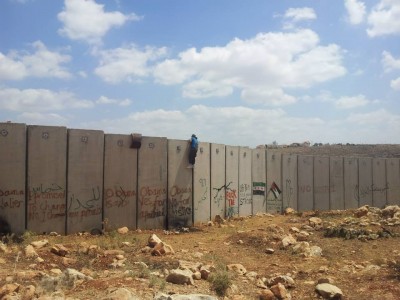 Graffiti visible on the Apartheid Wall

The wall itself is covered in creative responses to the illegality of the occupation such as “If Batman knew about this you would be in so much trouble” and “Freedom is never given by the oppressor; it must be demanded by the oppressed,” a quote from Martin Luther King, Jr. The residents of Ni’lin continue their march towards the wall, towards the land that was always theirs, and towards their freedom.

The response from the occupation forces today was violent, as they launched clusters of tear gas canisters into the crowd, igniting patches of ground and asphyxiating and blinding demonstrators, some of whom needed medical attention. Two soldiers climbed the wall and began shooting into the crowd, but retreated when stones were thrown at them and before anyone could be hurt. The other protestors erupted in cheers.

One Israeli demonstrator wrote messages in Hebrew to the Israeli soldiers, telling them that they are protecting illegal settlements on stolen land and harming innocent civilians for the benefit of corporations, attaching the messages to Frisbees and empty tear gas canisters. People then catapult them over the wall – a powerful message to soldiers who go about destroying the very land they claim to own.

Citizens of Ni’lin have been protesting against the annexation of their lands since 2004. So far Ni’lin has lost over 50,000 dunums, the majority of its land, due to the settlements and the route of the wall. Saeed Amireh, of the Ni’lin popular committee, believes this is a calculated measure to expel the Palestinians from their land, as many rely on farm land for livelihood. 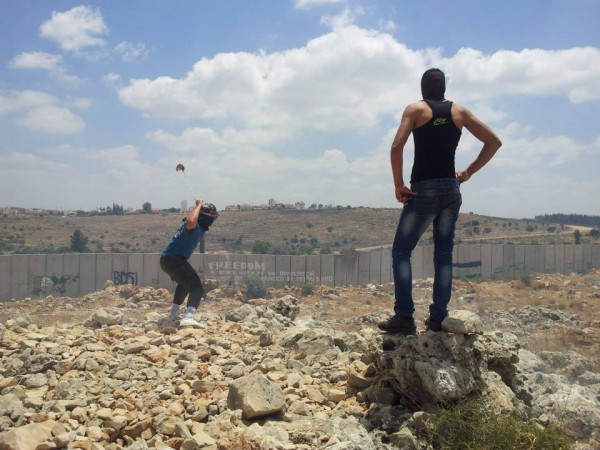