For Urif the price can never be high enough

On Tuesday, 11th June, Israeli forces invaded the village of Urif and arrested nine youths between the ages of eighteen and twenty-seven. This incident is believed by the villagers to be related to the ‘price-tag’ settler attacks that the village suffered on 30th April.

At around 1am, forty foot soldiers and four jeeps coming from the nearby Yizhar settlement raided Urif and arrested the nine youths.  Without giving any information, the soldiers left in the early hours of the morning, leaving the village at roughly 4am. 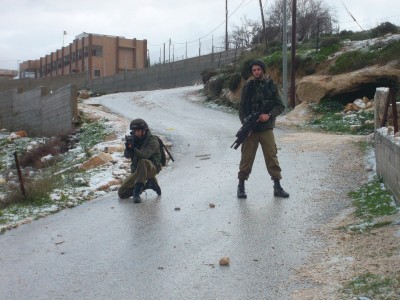 The town’s mayor says the incident is part of an ongoing assault on the villagers who rightfully resist settler attacks. He stated, “nobody complains when Israel violates the law like this anymore, they are too afraid of being arrested themselves”. He also believes there is a clear pattern of targeting all the young men in the area in order to create circumstances where the only people left to defend their land are older and other vulnerable people.

The incident, as mentioned earlier, is directly linked to the confrontations that erupted between Palestinian youths and settlers and Israeli armed forces after settlers from Yizhar settlement attacked the villages of Urif, Burin and Asira. These ‘price-tag’ attacks on Palestinian villagers were followed by the killing of a settler by a Palestinian at the Za’tara checkpoint on April 30th.

Urif, located southwest of the city of Nablus, is one of several villages in proximity to the extremely hostile settlement of Yizhar and as such subject to constant harassment and violence from settlers and Israeli forces.

Settlers from Yizhar, including the head rabbi, have distributed Islamphobic literature, describing Palestinians as a “Cancer that needs to be cleansed from the land of Israel” and created pamphlets expressing support for Israeli mass murderers, most notably Baruch Goldstein, who carried out the Cave of the Patriarchs massacre.

These settlers are also known for being the ideologists of the ‘price-tag’ practice, where any kind of action taken against settlement expansion in the occupied Palestinian territories by the Israeli government is met with harsh, violent and aggressive attacks on Palestinian communities.