UPDATE 1st June: Last night, two Israeli military jeeps invaded Kufr Qaddum. Soldiers threw stun grenades  and stuck several posters with photos of four children around the village. The posters read: “We are the army. Be careful. If we see you, we are going to catch you. If not, we will come to your houses and take you”

On 31 May the residents of Kufr Qaddum held their weekly demonstration after the Friday prayer and were violently repressed when the Israeli army invaded the village, firing tear gas and sound bombs directly at the protesters and into several houses and the local mosque. 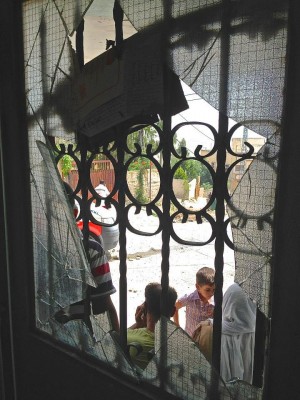 The protest began at around 13:15 with the regular march to the eastern side of the village toward the road closure that separates Kufr Qaddum from the illegal Israeli settler colony Qedumim, which was built on land stolen from Kufr Qaddum. As protesters approached the last house on the edge of the village, the road was blocked by one Border Police jeep and a bulldozer. A standoff ensued between Israeli forces and local youth who built defensive stone barricades along the main road to prevent an army incursion. After half an hour, Israeli soldiers began to shoot tear gas canisters from a device know as “The Tempest,” which fires multiple canisters simultaneously. As the protesters retreated from the continuous barrage of tear gas from Israeli foot soldiers, the bulldozer advanced into the village, clearing the barricades along the way.

Residents at the western part of the village alerted the protesters in the east that the Israeli army was seen on the road outside the entrance. As residents attempted to construct new barricades, 3 Israeli army and Border Police jeeps charged into the village, accompanied by others invading from the north and the east, attempting to surround the protesters. Many residents took shelter in nearby houses as army and border police forces in the center of the village began to fire directly at people. Several women came out from their houses to confront the soldiers, who continued to shoot indiscriminately at local youth. Many tear gas canisters were shot into houses and into the mosque, where carpets were burnt by the canisters. Excessive amounts of tear gas entered one home and 5 children (ages 9, 7, 4, 1 and 6 months) suffered from tear gas inhalation. A journalist from PALMEDIA also passed out from gas inhalation after putting his gas mask onto a local woman, and was assisted by local paramedics.

After half an hour, the Israeli forces withdrew from the town, having fired more tear gas at the protesters who had once again gathered at the eastern side of the village. Two Israeli activists were arrested and taken to Ariel police station. One was later released, while the other has not yet been released (as of midnight 31 May). After the demonstration, witnesses observed many spent casings from live ammunition along the protest route, as well as a window that was broken by the soldiers. 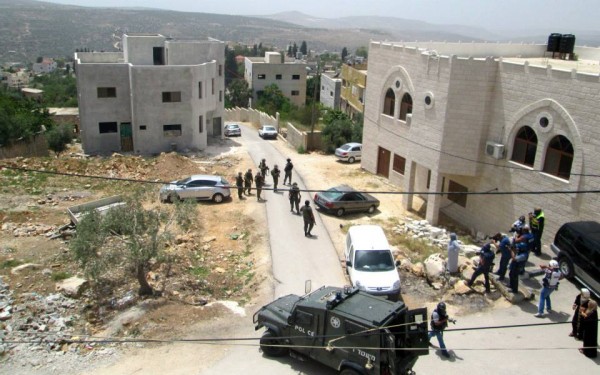