Villages of Urif, Burin and Asira violently attacked by settlers

Yesterday Israeli settlers from the Illegal settlement of Yizhar set fire to the fields of Asira al Qibliya, Burin and Urif as well as attacking the school and many homes in the villages, all while the Israeli Military and Border Police provided protection for them. 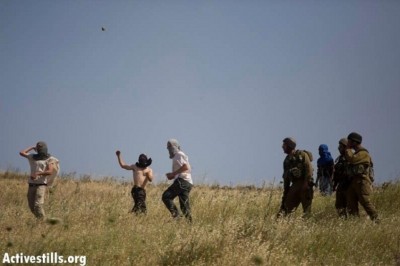 The attacks were provoked by the stabbing of a settler from Yitzhar settlement this morning who died on the scene at Tappuah Junction near Nablus. This was the first Israeli to die in the West Bank since 2011. 9 Palestinians have been killed in the West Bank since the beginning of this year and serious attacks by settlers regularly occur without punishment for the perpetrators. At around the same time as the settler was killed this morning, a man in Gaza was killed by a targeted Israeli air strike whilst he rode his motorcycle.

At 11.15am 50 settlers from Yitzhar, named by the UN as one of the most violent settlements in the West Bank, attacked the boys high school in Urif whilst lessons were in progress. Standing outside the school the settlers threw rocks into the school breaking windows. Two students were injured by the flying glass when it hit their head, another student was injured when a rock hit his foot. Around 100 students then fled the school by jumping over the outer walls whilst the other 100 students remained inside too scared to leave. They were then trapped in the school as the settlers continued to throw rocks at the school and into the car park and at cars when anyone attempted to leave.

The settlers simultaneously lit at least ten fires on the agricultural land surrounding the school. Within ten minutes of the attack the army arrived and began shooting tear gas into the school grounds and at locals who had arrived to protect the school. One student was hit in the head by a tear gas canister and taken to hospital for medical attention.

The fighting then continued on the land above the school where the fifty settlers continued to throw rocks at locals and Palestinians responded by throwing rocks in return. Around fifty army and border police stood between and around the two groups firing tear gas and sound bombs at the Urif locals. The army did not fire tear gas or sound bombs at the settlers. Settlers continued to throw rocks at locals and at international activists whilst the army tried to push the locals back, at times using pepper spray to incapacitate a number of people. Some scuffles between Urif locals and army broke out but no arrests were made.

The clashes continued until around 1pm when the settlers finally began to return to Yitzhar and locals were pushed back down into the village by the army using tear gas and sound bombs. A drone plane was spotted flying over the village at this time. The army continued to fire tear gas into the village for the next hour after the fighting had stopped. At least one local was incapacitated by gas inhalation and required medical attention. Around 3pm settlers approached the village from the other side and threw Molotov cocktails at machinery and lit fires on land near olive trees until they were driven back by locals arriving on the scene.

In the neighbouring village of Asira settlers set fire to 14 fields which destroyed large areas of land. 4 Israeli military jeeps entered the village and shot tear gas at the residents as they tried to protect their land. At the Tappuah junction school busses containing Palestinian children were stoned heavily by settlers. Around fifty settlers also attacked Burin during their rampage, attacking the village and setting fire to large areas of agricultural land.

The villages of Burin, Asira and Urif which surround the illegal settlement of Yitzhar face daily violence from its Zionist settlers. Palestinians are regularly injured, schools are frequently attacked, agricultural land it often set alight and residential homes are often damaged. The Israeli army also frequently raid the villages, often in the middle of the night, to search houses and make wanton arrests, often of children. Under the Fourth Geneva Convention collective punishment is a war crime. 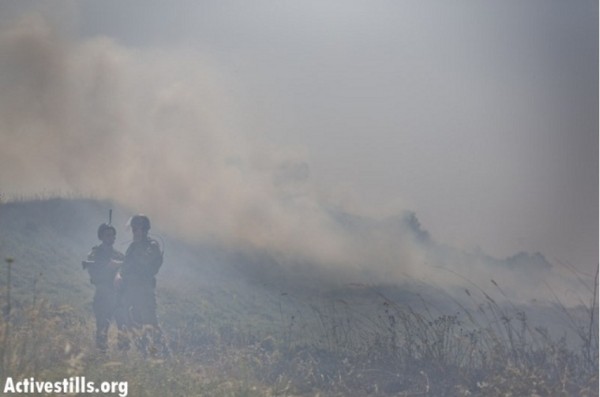