Following the events of the settler tour during yesterday afternoon Fuad Asem al Batsh, a sixteen-year-old minor, was arrested in Hebron without any evidence or court decision. He was released after about an hour.

It was at 10 pm in the old city that a group of around 15 heavily-armed Israeli soldiers invaded a family house stating they were looking for a boy who earlier the same day had thrown an object at a settler. In the presence of four international activists the soldiers forced themselves into three family houses before arresting Fuad Asem al Batsh in the fourth home, without any evidence against him. 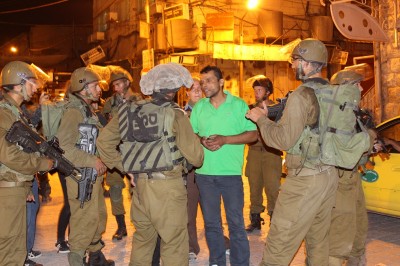 After fifteen minutes discussion between the boy and the soldiers, they removed him from the house. Despite objections from the internationals present, as well as the family, he was put in a military van and driven away. The activists were threatened with arrest if they took any pictures and the family’s cries and logical arguments didn’t change the situation. Fuad’s younger sisters were witnesses to the event and were clearly afraid and shocked.

During the hour of detention the sixteen-year-old boy was blindfolded, brought to a police station and questioned over and over again about the events during the day, when he in reality was visiting his uncle in a village nearby Jerusalem. The photos and videos that the military claimed existed were never shown and no further suspicion is claimed by Israeli forces.