The 15th May marks the 65th anniversary of the expulsion of 750,000 Palestinians from their homes and the destruction – and massacre in some cases – of more than 500 Palestinian villages by Zionist forces in 1948. 65 years on, the same Zionist project of expelling the indigenous population of Palestine continues. House demolitions, land confiscation, settlement expansion, military occupation, restriction of movement and systematic bombing of the Gaza Strip are aimed at ethnically cleansing Palestine for the sake of the Zionist dream: Greater Israel.

Palestinians from different villages and cities across the West Bank, Jerusalem, the Gaza Strip and refugee camps in neighbouring Arab countries have commemorated the 65th anniversary of the Nakba, claiming once again their right of return to their land, their homes and their history. 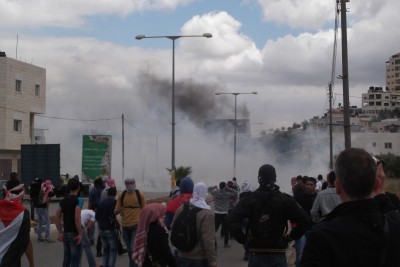 In Ramallah, at 11am, more than four hundred people marched from Muqata compound to Yasser Arafat Square waving Palestinian and ‘right of return’ flags. School children chanted slogans against the Israeli occupation and for the right of return of the five million Palestinian refugees around the world.

In Beit Ummar Palestinian and international activists briefly blocked Highway 60, the main north – south artery for Israeli settlements. The Israeli army responded by throwing stun grenades at the demonstrators. Soon afterwards Palestinian youth clashed with Israeli soldiers in olive groves surrounding the village as the army continued to invade the area. Excessive amounts of rubber coated steel bullets and tear gas were fired at the demonstrators. One was shot in the head and another in the leg and were treated by Palestinian medics on the scene.

65 years after the Nakba, or ‘catastrophe’, the Palestinian people continue to fight for their right to return, whether they are now in the West Bank, Gaza, displaced within Israel or in the refugee Diaspora. The Right of Return for Palestinian refugees is absolutely key in the struggle for Palestinian rights and freedom. 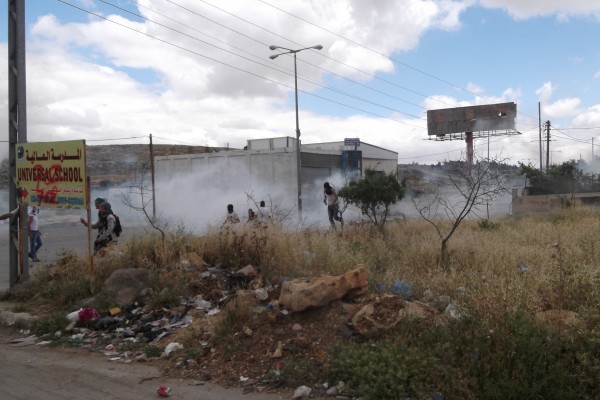 Protesters running away from tear gas at Ofer (Photo by ISM)