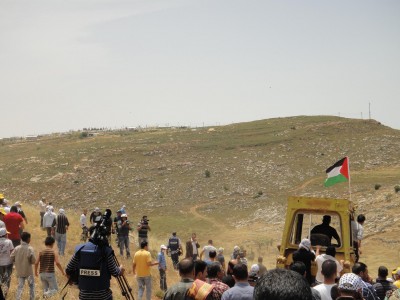 The village of Deir Jarir today, 17th May, held its fourth consecutive weekly demonstration to protest Israeli land grab and settler violence against its villagers. The rally was violently suppressed by Israeli forces, who shot large amounts of tear gas and rubber coated steel bullets at demonstrators. Live ammunition was also fired.

At 12am, around two hundred people gathered on a hilltop near the village where they held a long and emotive speech, followed by midday prayers. Soon after that, participants started to march, accompanied by a bulldozer, which was being used to work the land, along the road constructed the week before. Israeli forces located on the opposite hilltop, begun shooting tear gas at protesters, starting multiple fires in the valley.

Palestinian youth then confronted Israeli soldiers and border police officers as they continued shooting tear gas and rubber coated steel bullets at them. Over the course of the demonstration, the fire spread through the whole valley, damaging crops and olive trees on the land. A Palestinian fire brigade truck arrived at the scene, but was prevented by the Israeli forces to put out fires on the Palestinian land.

Israeli forces, who were spread across the hill in groups of five or six, continued to shoot tear gas canisters, rubber coated steel bullets – occasionally live ammunition shots were also heard by Palestinian and international activists. Despite the extreme levels of violence, no one was injured.

The protest finished at around 3.30pm when Israeli forces were driven from the scene by Palestinian protesters. Unarmed protesters from Deir Jarir began to hold weekly demonstrations a month ago, as violence and land grabs by settlers of the nearby Israeli settlement and outpost. Several weeks ago, settlers established a new outpost on a hilltop situated on Deir Jarir and Silwad’s land but Palestinians dismantled it after a Silwad villager was severely attacked by settlers. The village of Deir Jarir was also raided by settlers who set fire to ten of the resident’s cars. Previous demonstrations where villagers have tried to work their land have also been violently suppressed. 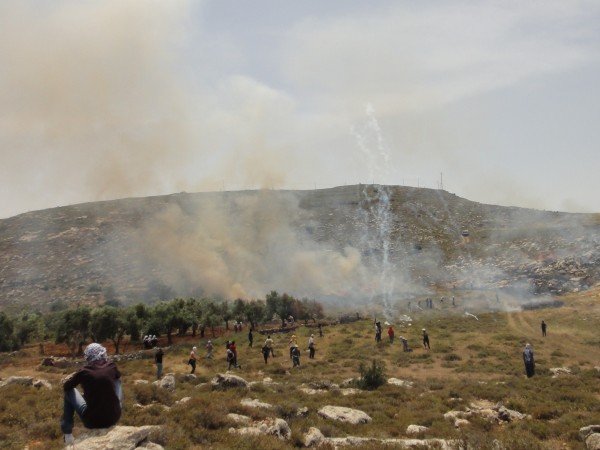 Tear gas being fired at demonstrators setting fires in the valley