During the last week Israeli military presence has increased dramatically in the area which Israel designates as Firing Zone 918, in the occupied West Bank. In recent days, military vehicles and helicopters have been surrounding villages in the area, including an incident on Sunday, when a helicopter landed in the village of Jinba, terrifying the inhabitants. International accompaniment of children from Al-Fakheit primary school continued until yesterday, 29th May, which was the last day of school and the final exam for the children. The Israeli military had previously threatened to confiscate the jeep which takes the children to school, stating that it was in a “closed military zone”. 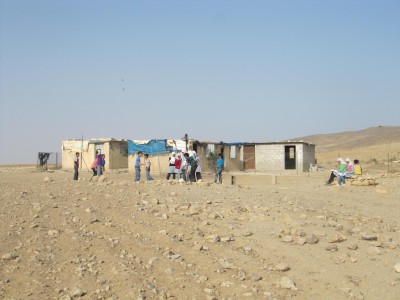 On Wednesday 29th May, a group of armed soldiers came within close proximity of the school as the children were arriving for their exams. This made pupils and teachers extremely worried. The soldiers remained there until the end of the school day.

At the same time a large group of soldiers was camped outside of the nearby village of Jinba, where they appeared to be doing military training within only metres of the houses. The soldiers also stayed in Jinba during the night. The harassment of locals did not end with the intrusive presence of the Israeli military. Last Monday night, Israeli soldiers invaded Jinba and beat a shepherd from the village. Two more beatings of shepherds have been reported in the nearby villages of Mirkez and Halaweh, also in the “firing zone”.

Additionally on Wednesday, Israeli settlers from the illegal settlement of Ma’on tried to erect a tent on a Palestinian road linking the village of Tuba with At-Tuwani. Palestinians from nearby villages arrived to prevent the creation of yet another illegal outpost on their land. At the same time, the Israeli military demolished some settler structures in the illegal settlement of Ma’on, to partly comply with the court ruling about the illegal presence of settlers there. Later in the day, the settlers retaliated with a “price tag” attack, burning 5 acres of Palestinian wheat and barley crops.

On the same day the occupying forces, who are responsible for accompanying Palestinian children from At-Tuwani to their school – to prevent attacks by settlers – did not arrive, leaving school children at risk as they had to walk home alone pass the illegal settlement. In the past, Israeli settlers have violently attacked children on their way to school in this location. When international human rights observers asked the military commander why the accompaniment was cancelled, he answered that it was too dangerous for the soldiers, as they fear the settlers themselves (see also Operation Dove report here) 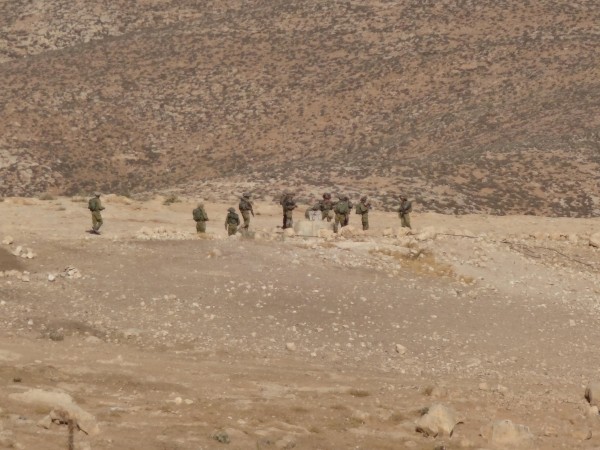 The South Hebron Hills area has witnessed a lot of violence and oppression since the creation of Firing Zone 918 and the establishment of several settlements around it. There are twelve villages in Firing Zone 918, all of which have been threatened in the past with eviction and demolition in order to make way for a huge Israeli military training area, free of Palestinian villages. Eight remain under threat, with a temporary injunction by the Israeli Supreme Court having recently been extended in January 2013. The headmaster of the school in Al-Fakheit said “The Israeli authorities know it is illegal to evict people for military training, so they will try to make people’s lives very bad so they just leave. Then if we leave, they will use the land for settlements.”

The Israeli forces have stated that they wish to create a general military training area in Firing Zone 918. This would be a breach of the 4th Geneva Convention, which states that an occupying force should not destroy property unless it is “rendered absolutely necessary by military operations” – general military training is not deemed “absolutely necessary” in international law.