Brother and sister arrested without charge in Kufr Qalil 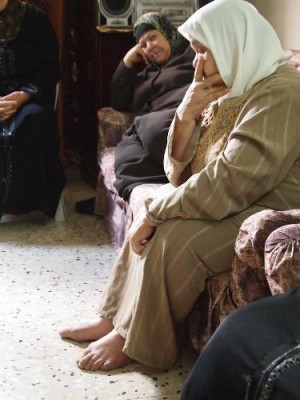 At 1:30 am on May 12, Israeli soldiers arrested a brother and sister from Kufr Qalil without charge and ransacked their home, terrorizing their family and leaving them with no information about the siblings’ imprisonment.

Israeli soldiers arrived at the residence of Abu Mahyoub Mansour in Kufr Qalil in south Nablus as at least five army jeeps surrounded the family home and eighteen soldiers entered looking for his daughter Tahrir, 29 and son Saddam, 27. All thirteen occupants in the house, including two small children, were woken and made to walk downstairs into one room, among them the youngest daughter, 19, who is severely disabled with cerebral palsy. She cannot walk and had to be woken up and carried down, crying in fear.

The children were scared and crying when soldiers put eye covers on them with slots for the eyes and then repeatedly screamed at them to be quiet. The noise of the raid woke up all the neighbours though no one dared to look out as more soldiers remained outside pointing their guns at windows.

Tahrir, who works as a seamstress during the day, was at home and taken into a separate room where she was searched and interrogated. After interrogation, her eyes were covered as she was taken into the other room where her sister asked her what they had said to her. Tahrir had laughed as they attempted to scare her and the commander said, “Don’t laugh because we we will give your family reason to be sad and cry about you and you will never see your family again.”

Saddam, married and father of two small children, was not at home as he works night shifts. His father was ordered to call him and ask Saddam to wait near a specific spot in Kufr Qalil. Abu Mahyoub and Tahrir were then driven by the army to locate Saddam. Saddam’s hawwiya (Palestinian ID) was taken and he was interrogated before being arrested and taken to the the house, eyes covered and hands bound. 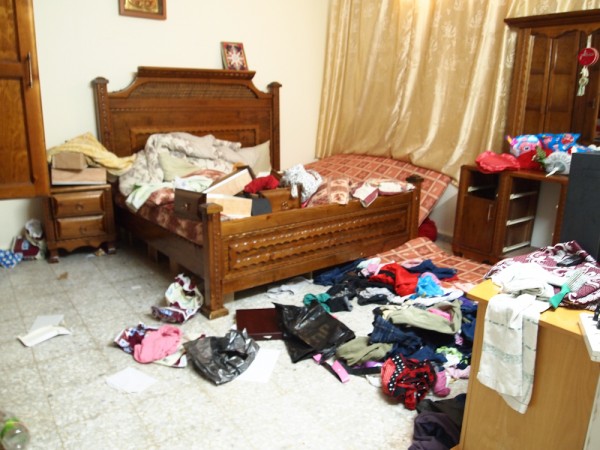 The ransacked home of arrested siblings Tahrir and Saddam

This is the second arrest for Saddam, who was arrested previously with his sister Samoud in 2005 when they went up near the illegal Bracha settlement to look for their brother Mahyoub on the day he was killed by Israeli forces. Subsequently Saddam spent two years in prison and Samoud spent four and half years.

On return to the house, Abu Mahyoub saw all the soldiers were outside and that inside the house had been taken apart, searched and ransacked. Wardrobes were emptied onto the floor, cupboards broken and a toilet seat had been ripped off. A computer hard drive, laptop, camera memory sticks, mobile phones and municipality gifts for prisoners’ families were taken.

The army was there until the first call to morning prayer at about 4 am. The officers did not state a reason for the two arrests and gave no information on where the young brother and sister were being taken. The family still has no information about their whereabouts; meanwhile, Mawahib, Saddam’s 4-year-old daughter, believes her father is away at work.

Residents say that army jeeps often enter Kufr Qalil, making arrests randomly and whenever they want. Relatives of the two arrested in Kufr Qalil have a 42-year-old son who has been imprisoned  for six years, a father of two sons, one 12 years old and the other 6 years old, who was still unborn when his father was arrested. The six-year-old met his father for the first time yesterday, May 12. The father, Shahir Mansour, is also said to need some medical attention which he is lacking in prison.