Residents of the village Sabastiya near Nablus have confirmed that the pipe which pumps raw sewage onto their land from nearby illegal settlement Shave Shomron has been shut off. The raw sewage poisoned both olive and apricot trees belonging to the village. 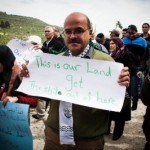 The residents of Sabastiya have been demonstrating against the dumping since March this year and are now celebrating the success of their campaign. On the three occasions that the villagers demonstrated against the sewage since March they have been joined by both Israeli and international activists. The demonstrations held on Fridays consisted of villagers marching towards Shave Shomron and praying on a field nearby. The Israeli army consistently broke up the peaceful demonstrations by shooting tear gas, rubber coated steel bullets and stun grenades at the unarmed demonstrators, including medical staff and journalists.
Sabastiya is an ancient village located just 10 km north of Nablus. For over a decade, residents of the village have been suffering harassment from Israeli forces and settlers. In 2001 settlers uprooted and destroyed around 1000 olive trees, substantially damaging the land of several families. In 2006 the Israeli army put up a fence in an attempt to confiscate the land where the trees had originally been, but farmers from the village pulled it down.