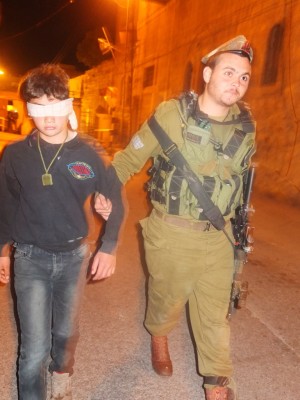 13 year old boy is arrested by an Israeli soldier

A thirteen year old boy was arrested from his home in the Old City of Hebron, blindfolded and detained inside several small checkpoint boxes as well as the military base on Hebron’s Shuhada Street. International activists who attempted to document the incident were physically stopped and threatened by soldiers and settlers.

The boy was taken from his home and transported to Checkpoint 56, a small metal box on the border between the Israeli and Palestinian controlled areas of the city. He was blindfolded and shut inside the checkpoint for around 20 minutes. After this, he was removed by soldiers and walked down Shuhada Street, still blindfolded, and put inside another small checkpoint box.

After 15 minutes he was removed from this checkpoint and walked to an Israeli army base. International activists who attempted to follow to document the situation were stopped by soldiers who called them “Nazi pigs”, pushed them and refused to accept their passports as identification. After several minutes of the soldier harassing activists a group of around fifteen settlers arrived, several carrying automatic weapons. They pushed and threatened the international activists – see video below. 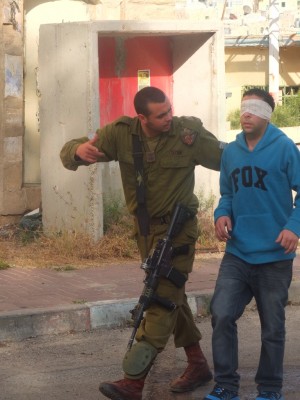 During this time, the boy was taken to the Israeli military base on Shuhada Street, at which point activists could hear several soldiers shouting loudly, seemingly at the boy. After around another 15 minutes, the boy was taken by jeep back to Checkpoint 56, where he was released to the Palestinian side of Hebron into the custody of the Palestinian police. He was accused by the Israeli military of stone throwing, a charge they regularly use against children and young men, many of whom are arrested at random.

Earlier in the day, a woman was detained at a checkpoint in the Tel Rumeida area of Hebron. When asked why the woman was detained the soldier told international activists that “she was suspected of carrying a knife”. Despite this accusation, she was not searched for knives andwas was released after ten minutes.

Another man was detained in the area of Shuhada Street before being blindfolded and led down the street by an Israeli soldier. The blindfolded man said that he did not know why he was being arrested, whereas soldiers claimed that he had entered the part of Shuhada Street to which the Israeli authorities deny access for Palestinians. Soldiers told international activists that he had been released but this remains unconfirmed. Another Palestinian man working with a Latvian journalist was also detained on Shuhada Street during the day, held at a checkpoint for around 15 minutes and then released.

The arrest of a 13 year old boy on the 14th April follows a disturbing series of arrests and detentions of children as young as seven in the Old City of Hebron in recent months – “Occupied Childhoods”, a report on child-arrests compiled by the Hebron Christian Peacemaker Team is available here.