Settlers from the Tel Rumeida area in Hebron gradually cut down 15 almond trees on privately owned Palestinian land over the last two weeks. The settlers also installed an irrigation system and planted seeds with the clear intention of taking over the land. The owner of the land has complained to the police and army on several occasions to no avail. 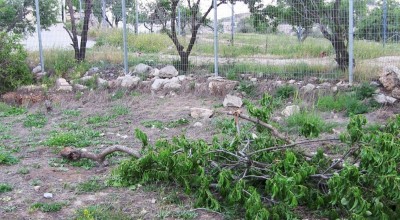 “The police just showed up, watched the settlers and then went away.” “The trees are very close to my heart, my children used to play around them.”

The Palestinian family Abu Heikel is renting the land from a Palestinian Jew called Jofef Ezra who fled Hebron during the 1967 Israeli invasion of the West Bank. The Ezra family continues to rent its property to the Heikel family to prevent the land from falling into settler hands. With the army on call to defend the settlers on their various, usually violent, whims, there are serious doubts that Ezra`s wishes will be fulfilled. Palestinians by contrast have little to no legal support or protection against their aggressive neighbors.

Settlers in Tel Rumeida regularly occupy parts of privately owned Palestinian property under the pretext that the Bible has given them permission to do so. As long as the Israeli army continues to tolerate the settlers’ illegal activity and offer them protection whilst attacking and arresting those resisting them, the expansion of illegal settlements and the level of settler violence is likely to continue escalating.