Around 50 Palestinians supported by around 20 international activists, demonstrated against the apartheid wall yesterday in Ni’lin, which is a village close to Ramallah. The residents attempted to dismantle the wall and were met with violence. Around 20 were treated for tear gas inhalation and one demonstrator was injured when he was shot in the chest with a tear gas canister. 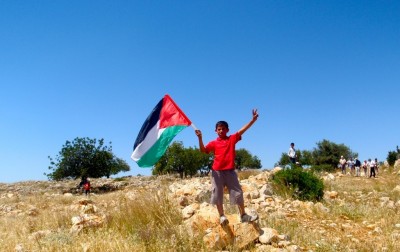 A young demonstrator at Ni`ilin

The demonstration started when around 100 people from the community gathered for the Friday prayer in an olive field. After prayers the demonstrators approached the apartheid wall, chanting peace slogans in Arabic and Hebrew. In a speech, a member of the Popular Committee expressed the injustices that Ni’lin has faced in the past and continues to face today because of the actions of the Israeli military.

Residents tried to open the metal door that separates them from most of their land that has been appropriated illegally by the establishment of settlements and the construction of the wall. Soldiers fired tear gas at the demonstrators. One demonstrator, who had climbed the wall using a ladder, was speaking to the soldiers through a megaphone before they shot him directly in the chest with a tear gas canister.The impact caused him to fall of the ladder and require medical treatment. More tear gas was fired at other demonstrators, photographers and internationals.The demonstration lasted about one hour, weakening the wall and showing the resilience of the population of Ni’lin.

Ni’lin’s history is characterised by land theft, starting with the first Israeli occupation of Palestine in 1948. Before 1948 the village of Ni’lin owned 58’000 dunams of land, from which 40’000 were stolen with the creation of Israel. The 1967 occupation lead to the construction of illegal settlements on Ni’lin’s land, stealing a further 8’000 dunams. The illegitimate establishment of the wall, which began in 2008, has stolen a further 2’500 dunams. Furthermore, the entrance of the village was closed in order to build a tunnel exclusively for settlers that lead to a further land theft of 200 dunams, highlighting the apartheid nature of Israeli policy. Nearly 90% of Ni’lin’s original land has been lost due to this systematic theft from war, settlements and the wall.

The non-violent demonstrations since 2008 have lead to the killings of five Palestinians. 10 year old Ahmed Moussa, 17 year old Yousef Amera, 22 year old Arafat Khawaja, 20 year old Mohammed Khawaja and 36 year old Yousef ‘Akil’ Srour. The residents of Ni’lin still struggle for peace and justice, and will not give up hope in spite of Israel’s use of extreme force and oppression. 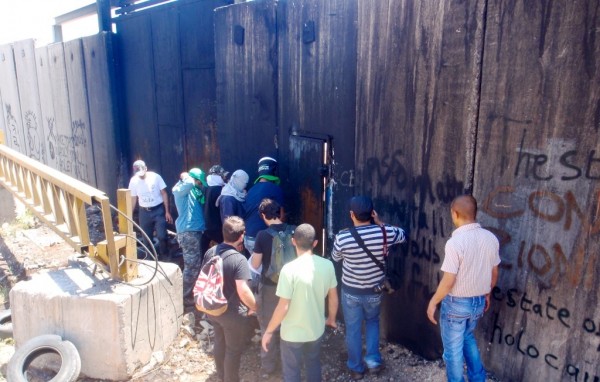 Demonstrators at the gate in Ni`ilin