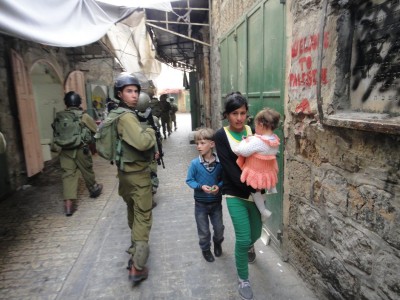 Israeli soldiers invaded at least four Palestinian houses in the city of Hebron on Saturday 13th April, prior to and during the settler tour, intimidating children and families. During the tour, around fifty settlers and Jewish tourists occupied the Palestinian souq (market), surrounded by around fifty heavily-armed Israeli soldiers, border police and police officers.

Before the tour began, around twenty soldiers walked through the market, pointing guns into doorways, intimidating shoppers and restricting movement for Palestinians. At this point soldiers invaded two Palestinian homes, stationing themselves on the roofs of these homes for several hours until the end of the tour.

Following this initial military sweep of the area, fifty settlers and tourists entered the souq from settlements on Hebron’s Shuhada Street. Surrounded by around the same number of Israeli military personnel, they walked through the market, stopping regularly as their tour guides gave a biased, inaccurate and sensationalised account of the history of Hebron. 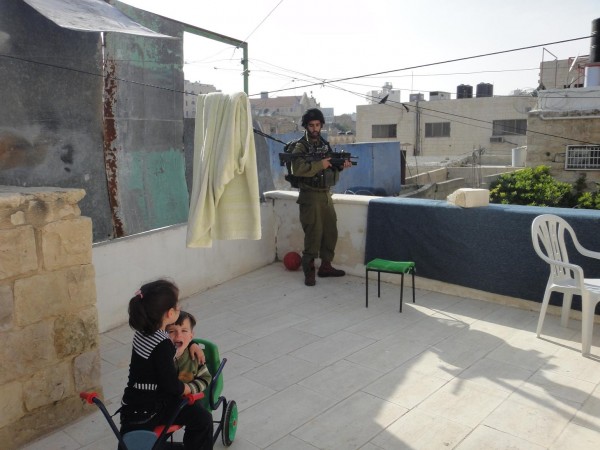 As the tour progressed through the souq, a group of soldiers split from the main group and invaded two other Palestinian houses, in one home disturbing a family with several young children and in another walking in on a young woman who was home alone (see video below). She stated that they enter her home every week, and she is usually the only person there. The soldiers are all heavily armed, aggressive and do not respond when asked why they are entering private Palestinian property.

After around an hour of disturbing Palestinian life in the souq, the settlers, tourists and soldiers returned to illegal Israeli settlements in the centre of the Old City of Hebron.

This “tour” of Hebron happens every week and is a regular disturbance for Palestinians in the busy souq of Hebron. Since the 2000 closure of Shuhada Street – traditionally the busiest market street in the Old City – more trade has moved into the souq. Rather than close it, many Palestinians believe that the Israeli authorities are trying to make life as uncomfortable and unsustainable as possible, in the hope that Palestinians will move from the area.