New
Home / Hebron / A present to ISM from our zionist neighbours

A present to ISM from our zionist neighbours

The ISM team based in Hebron woke up last week to find that their zionist settler neighbours had left a present for them on their doorstop. A tyre , a large piece of cloth and a stone were organised onto a pile just outside the apartment door, which according to our Palestinian neighbours , symbolises that they plan to set fire to the apartment. 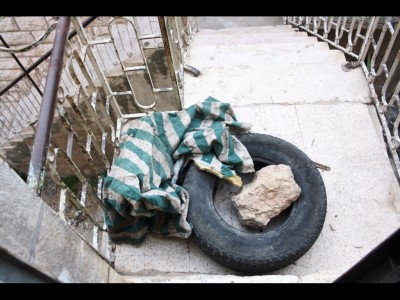 A present to ISM from out zionist neighbours

Settler intimidation and violence towards ISM activists is not unusual , especially in central Hebron where roughly 500 settlers are “protected” by thousands of ISraeli soldiers. The situation is particularly tense on and around Tel Rumeida where harassment of Palestinians is frequent as settlers , often armed with machine guns, share the same street.

Only two weeks ago an international was attacked by a settler, most likely because she was wearing a head scarf and several years ago an ISM activist had a bottle smashed on her face whilst settlers chanted “We killed Jesus and we will kill you”.