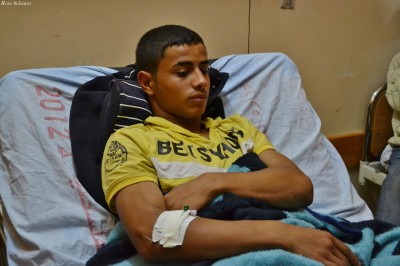 Jamil Wael Risha, 17 years old, Palestinian youth of Gaza City, was injured on the afternoon of the 26th April by the Israeli army at the Jabalia border, North Gaza Strip.

International activists visited Kamal Odwan hospital to understand what happened to him and check his condition. Dr. Muin Almasri, director of the public relations department of the hospital, informed us that Jamil had been transferred overnight to Shifa hospital in Gaza City. “We suspected the need for vascular surgery,” he told us.
At Shifa hospital international activists met Jamil, who had been admitted to the orthopedic ward. Beside him was one of his brothers and his father Wael.

Jamil told us that usually on Friday he went with his friends to the cemetery that lies to the east of Jabalia, near the barrier separating Gaza from the territories Israel occupied in 1948. This Friday they headed to the cemetery after Friday prayers, around 15:00.

Suddenly they saw Israeli soldiers out next to two jeeps. Four soldiers, Jamil told us. So the boys, at the height of the separation barrier, started throwing stones at the soldiers. The Israeli soldiers started shooting heavily at the Palestinian youth.

Jamil hit a soldier with a stone, but the soldier responded by shooting and injuring him in his left leg at around 17.00, when he was transported by car to Kamal Odwan hospital. A nurse told us he could leave the hospital in a week.

An x-ray of Jamil’s leg shows the fracture and the presence of fragments of explosives inside of the leg. All the muscle had been damaged. The bullet used by Israeli soldiers was a dum-dum bullet, also known as an expanding bullet, which is prohibited by international law. The expanding or dum-dum bullet, expands inside the body causing fractures and huge damage to internal organs, bleeding and in many cases death. Despite the international ban on the use of these bullets, the Israeli army continues to use them. 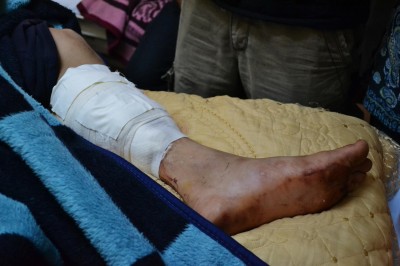 Jamil’s leg after having been shot – photo by Rosa Schiano

Jamil was asked by international activists if he felt fear when he goes along the border – if he was aware he was risking his life. Jamil said: “I am not afraid.” His family consists of 9 people, who he supports with his work.

The cease-fire agreement which began on the evening of 21st November after the Israeli military offensive “Pillar of Defense”, was supposed to mean that the Israeli army would stop firing on civilians along the border. The agreement allegedly said they would allow farmers in Gaza access to farm their land freely, at least to 100 metres, thus eliminating ‘the “buffer zone” of 300 meters, illegally imposed by the Israeli army.

The agreements also consented to the fishermen of Gaza reaching 6 nautical miles from the coast. These agreements have never been respected by the Israeli army, who continued to shoot at farmers and civilians in the lands along the border and attack fisherman even within 6 nautical miles from the coast. During the recent visit of Obama in March, an armed Palestinian group launched four rockets into southern Israel, missiles that have not caused any damage, but the Israeli authorities decided to cancel all agreements which had come with the ceasefire.
However, this means little change for Palestinian civilians, who despite the agreements, have constantly been victims of Israeli aggression. Since the beginning of the ceasefire in fact, there have been more than 90 Palestinian civilians wounded, and 4 young civilians killed.

Jamil, like many boys his age, was throwing stones at the soldiers. This is one way to protest against an illegal occupation, a siege against Gaza, that reduces Gaza to a prison. He was throwing stones from beyond the walls of this prison, in which he was wrongly detained.

The soldiers, however, do not mind the age of these kids, do not hesitate to shoot, even if they use live ammunition prohibited by International conventions.

This is a growing movement internationally that gives us hope for change in Palestine. Not to act is to be complicit.

Hopefully Jamil will be better soon without complications. To him and to his family, our solidarity and our affection.