Update 20th March 20.45: Three Palestinians have been released on bail and all three internationals are being deported.

Four Palestinians and three international activists have been arrested by the Israeli military today, 20th March 2013, during a demonstration calling for Obama to take action against the Israeli occupation of Palestine. Obama is currently visiting Israel and plans to make a short visit to the West Bank.

Palestinian and Israeli activists walked together down Hebron’s Shuhada Street today – an area which Palestinians have been denied since the year 2000. Activists wore masks of President Obama and Martin Luther King Jr and wore “I Have a Dream” t-shirts, representing the struggle for equal rights for Palestinians and an end to Israeli occupation. International activists were observing and documenting the protest.

Israeli military arrived on the scene, breaking up the demonstration and beating Palestinian protesters, including prominent Youth Against Settlements organisers Issa Amro, Badia Dwaik and Mohammed Zugayer. Soldiers were witnessed beating Palestinians and dragging them into side streets away from observers, media and journalists. There are also reports that at least one journalist is currently being detained, and one Palestinian activist has a broken nose. The four Palestinians and three international activists – from Germany, Denmark and the Czech Republic – are still currently being detained in the police station in illegal Israeli settlement Givat Ha’avot.

Shuhada Street was previously the main market street of the Palestinian city of Hebron. In 1994, access was banned for Palestinian cars, and in the year 2000 Palestinians were denied access to the street altogether, because of the 500 illegal Israeli settlers who now live in the area. There is a strong Israeli military presence in Hebron and there is severe restriction of movement for Palestinians.

Obama has not taken action against the Israeli occupation of Palestine and the US administration continues to fund the Israeli military. Obama said in a speech on arrival to Israel today, “I see this visit as an opportunity to reaffirm the unbreakable bond between our nations, to restate America’s unwavering commitment to Israel’s security and to speak directly to the people of Israel and to your neighbours.” 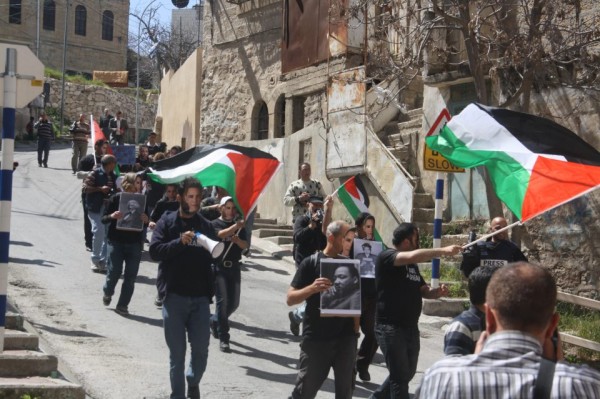 Demonstrators with Obama and MLK masks – photo by Youth Against Settlements