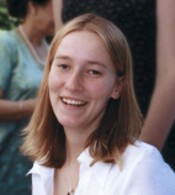 The International Solidarity Movement write this message in her memory.

Rachel, a 23 year old woman from Olympia, Washington, was crushed to death by an Israeli army bulldozer on the 16th March 2003, whilst protesting non-violently against the demolition of a Palestinian house by Israeli forces. As an activist she spoke out about the injustices that she saw in Gaza.

“I feel like I’m witnessing the systematic destruction of a people’s ability to survive. It’s horrifying… Sometimes I sit down to dinner with people and I realize there is a massive military machine surrounding us, trying to kill the people I’m having dinner with.”

She is remembered with love still by Palestinians and new generations of ISM volunteers – for many of whom, Rachel’s untimely death was an inspiration to become more involved in the struggle for freedom for Palestine. We honour her memory and what she was standing for, whilst she stood in front of that bulldozer ten years ago today.

The International Solidarity Movement continues to work for justice, peace and freedom for Palestine – where the occupation still strongly resembles Rachel’s words in the video below.

Our thoughts today are with Rachel’s family, and as we’re sure Rachel would have wanted, also with all the Palestinian families who have lost a loved one to the Israeli occupation.