22 year old Ibrahim Saadi is still being held at Ofer Prison in Ramallah after being shot in the head close range by a rubber bullet and arrested during a peaceful demonstration in Hebron on Friday.
His brother told us he had recieved a number of stitches on his head before being transferred to Ofer. 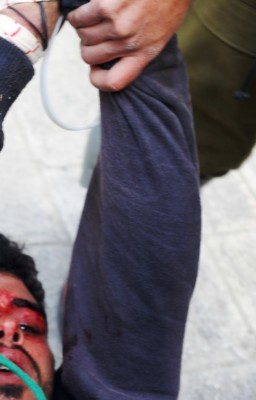 The peaceful protest organised in remembrance of the Abraham mosque massacre in 1994 was broken up by tear gas and stun grenades in Hebron on Friday. Many parts of Hebron have been shut off to palestinians since the massacre, including Shuhada Street which was once a busy commercial area.
The demonstration was organised by Hebron Defence League and was attended by Palestinian, Israeli and International activists who sat down on the road close to the gate which blocks access to Shuhada street. Soldiers threw tear gas canisters and sound grenades at the demonstrators causing many to disperse.

When the remaining demonstrators regrouped, they were prevented from moving anywhere else by a line of soldiers. Soldiers attempted to take the megaphone of one activist but was blocked by both Israeli and International activists.

Not long after the demonstration ended , 22 year old Ibrahim Sa`adi was dragged unconscious down the street by a group of soldiers with his face covered in blood. According to several eyewitnesses including his brother, Ibrahim was shot at close range with a rubber bullet. His eight year old sister saw the entire scene and was left in shock.
After the news of Sa`adi`s arrest spread , clashes erupted around bab al zawiya area of Hebron. Dozens of demonstrators were injured , including one international, as the army fired rubber coated steel bullets, tear gas, stun grenades and live ammunition. The clashes continued until after sunset. 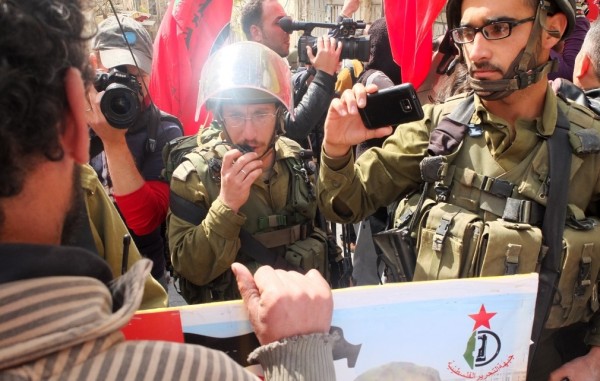 Earlier that morning 19 year old Abdel Basset was arrested by soldiers in Tel Rumeida A witness who filmed the arrest was made to delete the video by the soldiers. 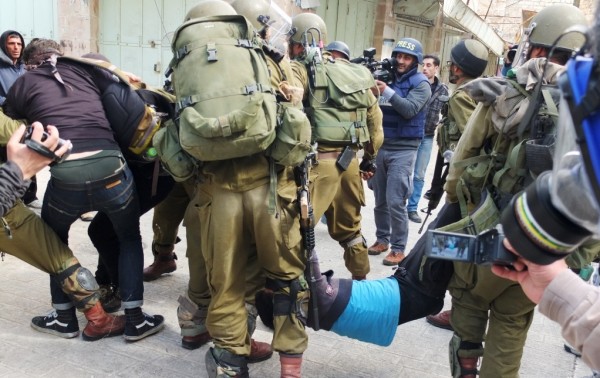 Ibrahim Saadi is dragged down the street unconscious by soldiers