Muhammad Asfour, 23, was injured two weeks ago from rubber coated steel bullet in his head during a protest. His Funeral will take place after Friday noon prayer in Aboud. Since the beginning of 2013, six Palestinians were killed from soldiers’ shooting.

The medical staff of Echilov hospital declared today the death of Muhammad Asfour, 23, resident of the village of Aboud West of Ramallah, of injury sustained two weeks ago, after he was shot by Israeli soldiers during clashes that erupted during a protest at Aboud in support of Palestinian prisoners on hunger striker. 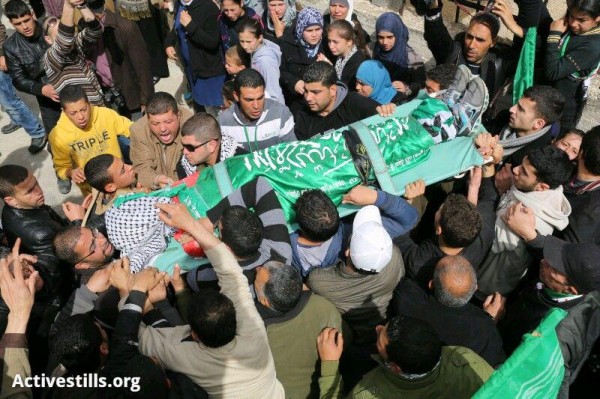 Asfour was shot on February 22nd, with a rubber coated steel bullet in the head which settled in the brain. He was evacuated to Salfit hospital and then to Rafidya Hospital in Nablus. Few days later he was transferred to Echilov hospital in Tel Aviv in critical condition.

Asfour is the sixth Palestinian to die from Israeli soldiers shooting in the West Bank and Gaza Strip, (see B’Tselem report here), in addition to prisoner Arafat Jaradat who died two weeks ago in the Israeli prison “Megiddo”, six days after his arrest:

12 January 2013: ‘Udai Darwish, 21, of Dura, Hebron District, fatally shot by soldiers after crossing the Separation Barrier into Israel on his way to work

15 January 2013: Samir ‘Awad, 17, of the village of Budrus, Ramallah District, fatally shot by soldiers beside the Separation Barrier near Budrus