One international activist and two Palestinians were arrested at this Friday´s demonstration in Kufr Qaddoum. 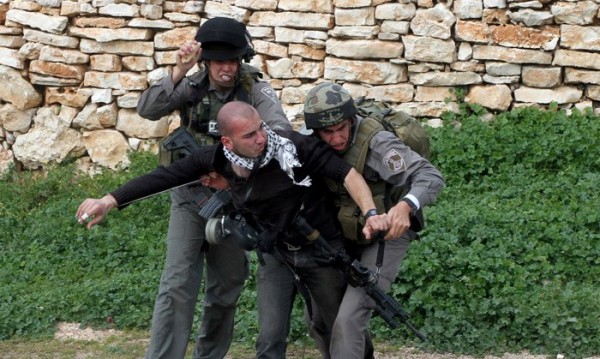 Although being restrained by armed police, a rock is used to finish the job (source: Wafa/ICAI)

Around 150 Palestinians, together with Israeli and international activists, participated in Kufr Qaddoum’s weekly demonstration against the closure of the road leading to Nablus.
After midday prayers, protesters marched from the center of the village up the main road, but they were soon blocked by Israeli border police who threw stun grenades at the crowd. Clashes ensued for half an hour, after which Israeli forces retreated. Soon after, border police agents suddenly reappeared at the scene and, whilst throwing stun grenades, arrested two Palestinians – Belal Fathi Jomaa (22, now in Huwara military base) and Nayif Khalel Jomaa (17, currently in Megiddo prison, where Arafat Jaradat was recently murdered) – and one ISM volunteer. The Palestinians were beaten up, one with a rock against his head and the other was caused a nose bleed; whilst the international activist was, once captive, blindfolded, punched in the head twice and had rifles cocked next to him in order to intimidate him.

Israeli authorities are falsely charging the three protesters with throwing stones, a common ruse. The international activist is facing deportation within the next few days. Recently, two other international activists were deported after taking part in Canaan protest camp in the South Hebron Hills. Israeli authorities regularly falsely accuse international human rights activists in order to deport them. This can be seen by the fact that no evidence of crime was presented during the ISMer´s court hearing on Sunday. 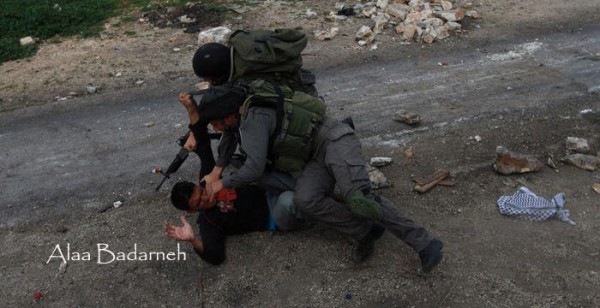 Another international activist who was present at the scene stated: “We will never be deterred by these arrests and deportations. We are not doing anything illegal, but supporting the Palestinian people in their legitimate struggle against an illegal military occupation. We will continue coming to Palestine, in hundreds and thousands. Israel will never stop the movement of international solidarity.”