23 year old Mohammed Asfour died on the 7th of March, from injuries sustained during a demonstration in solidarity with Palestinian prisoners on hunger strikers in Israeli jails. He was shot in the head with a rubber-coated steel bullet at the demonstration on the 22nd of February and was treated in the Israeli Echilov hospital, but finally succumbed to his injuries on Thursday.

The funeral was held on the following day, Friday the 8th of March, with a procession of cars adorned with Palestinian flags following Mohammed’s body from Ramallah to his home village of Aboud. There was already a strong Israeli army, police and border police presence at the entrance of the village as around 2000 people from surrounding villages and across the West Bank arrived to pay their respects. Mohammed’s body was transported to his home and to the mosque, where prayers were held. He was then taken to the village cemetery and buried. 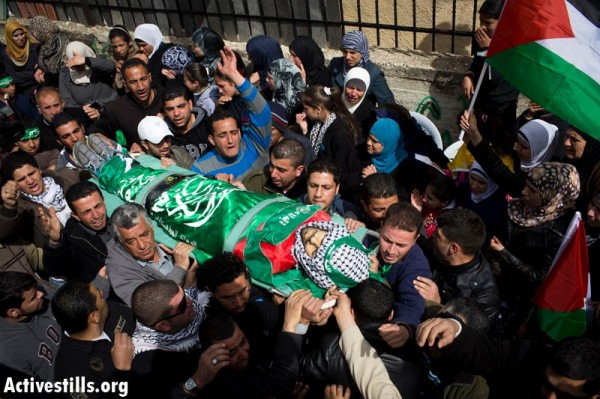 During the burial, it was already possible to hear tear gas being fired by the soldiers surrounding the entrance of the village. Clashes broke out between the army and mourners, who moved to protect their village and express the anger and outrage felt at the death of one of their loved ones. Stones thrown at the invading army vehicles by Palestinian youth were met with volleys of teargas and rubber bullets.

Blocks placed by Palestinians on the road to the village were cleared by an army bulldozer, allowing foul-smelling army ‘skunk water’ to be sprayed into residential areas. Several people were injured by rubber coated steel bullets and by tear gas canisters, requiring treatment from Red Crescent paramedics. Many protesters also suffered from the effects of tear-gas inhalation. Clashes continued late into the afternoon.

Mohammed’s is the sixth death in 2013 resulting from shooting by Israeli soldiers in the West Bank and Gaza. There is a lack of accountability for Israeli soldiers who have caused these deaths. Investigations tend to be fruitless if they even occur, and there is rarely any punishment, let alone conviction for those responsible. Of the 240 complaints against the IDF that were registered in 2012, only one resulted in an indictment.

The demonstration that led to Mohammed’s death was in solidarity with Palestinian prisoners in Israeli jails, many of whom are on hunger strike, as well as for prisoner Arafat Jaradat who was tortured to death in an Israeli jail.