Families home destroyed for the second time in a year

Israeli occupation forces demolished a home near Idna, without warning or having issued a demolition order. The Family had their house destroyed one year ago. 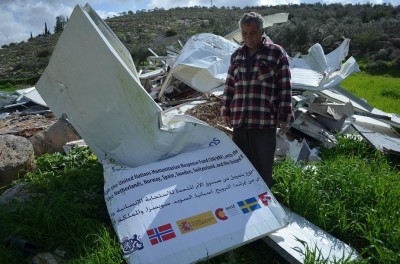 Mohammed Tomazi stands next to his destroyed home

At that time the army destroyed 2 wells belonging to the family said to be 2000 years old. There was no demolition order on the house and no warning was given to the family.

Mohammed is a farmer who has lived here for 19 years, his family grows crops of wheat, fool, courgette, cucumbers and lemons in the valley. The hillsides are covered in olive trees. There is excellent land in the valley for agriculture. A relative, lawyer, Dr Raid Tomazi said “There is not much land left here in Idna. They dont want anyone to build in the area at all, so nobody can take care of his land.” 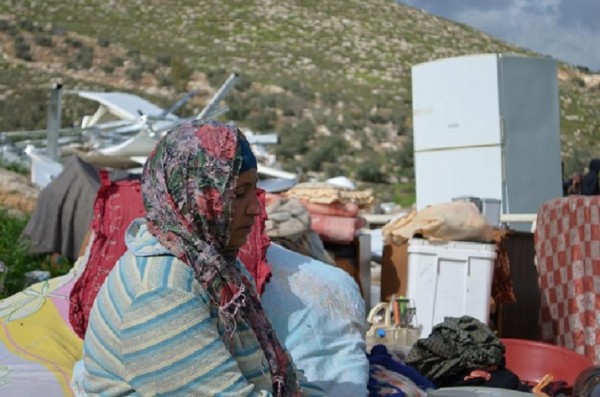 About the soldiers Raid Tomazi said “Soldiers have no respect for international organisations.” He went on to say the soldiers said “We know this is supported by nice people, but we dont care for for anybody. Them or you, we dont care.” Mohammed said of his home and livelihood “It doesnt affect their security at all.”

Amongst the rubble of two homes, next to their fridge standing in the open air, with the food still inside, Abdel Fatah Ahmad Tomazi, Mohammad’s wife, sat stunned. When asked what the family will do now Mohammad gave an exasperated laugh, Raid explained “The family will stay here, sleep here, they have nowhere to go. It is too cold. They will hope to receive a tent or something from the red cross. Two of the girls went to university this morning, they do not even know yet.” Two of Mohammads daughters go to Hebron University, one studying to be a teacher, the other geography.

At 5pm volunteers from the PRCS (Palestinian Red Crescent Society) Brought an emergency tent, again donated by the UN. Mohammad enthusiastically helped pitch the tent in the gathering gloom of the February evening. He will stay on his land and tend the crops, but the open ended valley was getting very cold by then, and instead of their home the family have an emergency tent with no heating, for shelter. 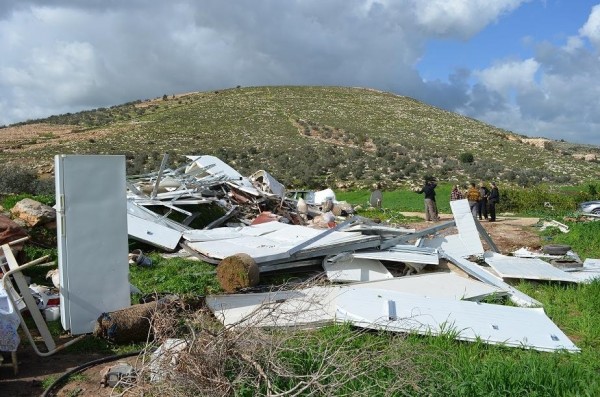 What remains of the Tomazi house